Are you being serious right meow? It’s cool if you don’t want to eat meat, but we are wired to do so.

Do the right thing and beg the mods to delete this thread asap.

So farmers are getting some relief?  Awesome if so

How dumb is OP

Your increased estrogen levels from not eating meat are showing in this menstruation of a post.

I'd ask what you eat if it's not meat or vegetables, but your SN already answers that question.

op is mostly wrong, but our farm welfare program is very flawed.

Nope, no one is using this to attack people they don't like.

I'm glad we've all risen above that sort of thing!

Socialism for corporations only

Socialism for corporations only

If you really want to talk about socialism and the greater good, and if you want to deem this socialism...

Based on the 2, at a time when shortages are occuring an increase in meat to the supply chain is far more beneficial to the population, than dumb fuck people shitting out children while being uneducated, unemployable, and of no actual benefit to society.

I know that's a harsh statement, but the reality is one as a society we can certainly debate the merits of need because there is a legitmate need, the other is something we have no use for increases of. Much less increases in assholes who contribute nothing.

Yes they are people, no I'm not saying let's do anything to them. I'm simply advancing the idea that we have 100% learned that entitlement spending, be it personal or corporate does nothing but breed an increase and dependency.

If you want to make the argument that increasing entitlement spending on people who provide any benefit other than existing while decreasing spending for companies that provide a service/good the country is begging for I'd love to hear it. Maybe you will change my mind.

Stop using this talking point, it makes you look dumb.

Read Wealth of Nations and there are plenty of gov't interventions in the economy that Adam Smith approves of:

Here is a list extracted from Wealth Of Nations:

the Navigation Acts, blessed by Smith under the assertion that ‘defence, however, is of much more importance than opulence’ (WN464);

Sterling marks on plate and stamps on linen and woollen cloth (WN138–9);

enforcement of contracts by a system of justice (WN720);

wages to be paid in money, not goods;

obligations to build party walls to prevent the spread of fire (WN324);

rights of farmers to send farm produce to the best market (except ‘only in the most urgent necessity’) (WN539);

‘Premiums and other encouragements to advance the linen and woollen industries’ (TMS185);

‘Police’, or preservation of the ‘cleanliness of roads, streets, and to prevent the bad effects of corruption and putrifying substances’;

patrols by town guards and fire fighters to watch for hazardous accidents (LJ331–2);

regulation of institutions, such as company structures (joint- stock companies, co-partneries, regulated companies and so on) (WN731–58);

temporary monopolies, including copyright and patents, of fixed duration (WN754);

education of people of all ages (tythes or land tax) (WN788);

encouragement of ‘the frequency and gaiety of publick diversions’(WN796);

the prevention of ‘leprosy or any other loathsome and offensive disease’ from spreading among the population (WN787–88);

registration of mortgages for land, houses and boats over two tons (WN861, 863);

natural liberty may be breached if individuals ‘endanger the security of the whole society’ (WN324);

limiting ‘free exportation of corn’ only ‘in cases of the most urgent necessity’ (‘dearth’ turning into ‘famine’) (WN539); and moderate export taxes on wool exports for government revenue (WN879).

Japan is the top destination for U.S. beef exports so far in 2020 followed by South Korea & Mexico.

The United States has exported beef to 107 different countries so far in 2020. 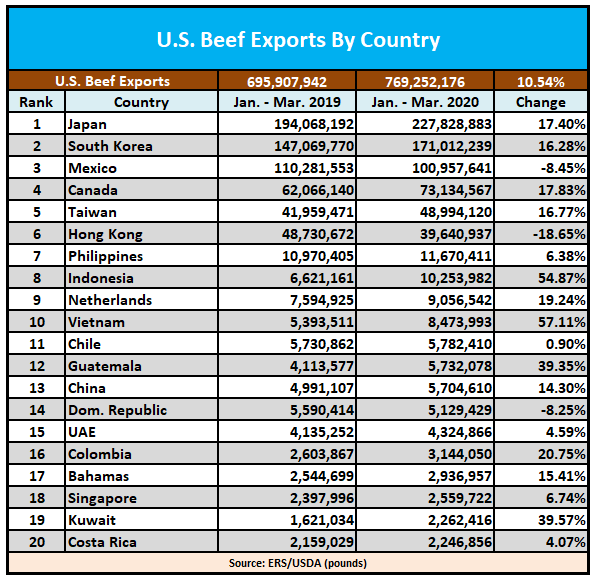 Its rare when a thread is this well done

Japan is the top destination for U.S. beef exports so far in 2020 followed by South Korea & Mexico.

The United States has exported beef to 107 different countries so far in 2020.