What is Dojo Storming?

Although the practice is dying out, dojo storming (showing up a martial arts academy and demanding to fight a gym representative) has existed in martial arts for many generations. Called Dojoyaburi in Japanese, it has a history in the land of the rising sun extending back to ancient times. For example, the Kodokan school of judo was intently involved with Dojoyaburi during its early years.

The Kodokan sent out representatives globally, and in 1914, one of them, Mitsuyo Maeda, carried that dojo storm spirit to Brazil; the practice was fervently adopted by the Gracie family. Generations later, when Rorion Gracie came to the United States in 1979, it didn’t stop; the practice inspired Art Davie to co-found the Ultimate Fighting Championship.

That’s the glorious front of dojo storming, but every front has a back; dojo storming can get ugly. In 1970, John Keehan, who had ads in the back of every comic book at the time under the name of Count Dante, plus a fellow black belt named Jim Koncevic, and three students stormed the Green Dragon Society’s Black Cobra Hall in Chicago. In the ensuing melee, Koncevic was killed with a traditional martial arts weapon.

In another infamous incident, in 2016, in Hamburg, Germany, MMA fighter Abeku Afful was in his gym, when five men armed with clubs, knives, and a machete arrived at about 9:45 p.m, surrounded him, and attacked. The incident below is in this most unfortunate vein.

What Happened In Basel?

What transpired sounds like something out of a movie, but was established as fact during a massive trial. The incident took place on February 24, 2014, at Reinach Superpro Sportcenter, in Basel, Switzerland. The gym is owned by Shemsi Beqiri, a Swiss kickboxer, of Albanian extraction.

Beqiri had trained with a Portuguese coach, Paulo Balicha, himself a former kickboxing world champion. In time Beqiri broke away and opened up his own gym. Relations between the pair deteriorated, and one day Balicha showed up with approximately 20 masked men, armed with bats, tire irons, knives, and a pistol.

The group moved everyone in the gym out of the way, including children, and demanded that Beqiri fight Balicha, with no gloves, just wraps. The gym owner told his students to back off, and accepted the challenge. The pair fought, with the armed goons shouting encouragement and instructions. Balicha rapidly realized his stand up was second best, and repeatedly tried to take the fight to the ground, but was unsuccessful.

Beqiri sustained a fractured his hand and nose, but ultimately got on top and bested the dojo stormer via ground and pound, at which time the gang that entered his gym broke it up.

Beqiri is the one with hair. 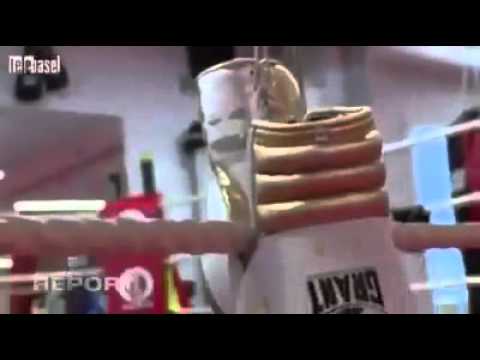 In all, six people suffered injuries. Beqiri was forced to withdraw from a fight scheduled vs. Murthel Groenhart at Glory 14, just two weeks later on March 8.

Balicha and many of his gang were arrested. After an investigation lasting nearly three-and-a-half years, 17 people were brought to trial; it was one the most complex trials in city history, and lasted 28 days. Beqiri’s belief that Balicha was wearing brass knuckles was not substantiated, and the court indicated it did not seem likely, but the sentences were still serious.

Balicha was sentenced to two years and nine months in prison, of which he was required to serve twelve months. Other defendants received lighter sentences, and six were acquitted entirely, as there was no clear evidence they were there. However, DNA on a club left behind irrefutably tied him to the attack. Fines were also assessed, totaling 28,400 francs (close to US $30,000). Further, Balicha’s reputation as a coach, athlete, and role model was destroyed. His career was over.

Beqiri would fight on, and retired in 2018 with a record of 87-9, after earning a number of European and world titles. Opponents included Robin van Roosmalen, Yoshihiro Sato, and Giorgio Petrosyan. He still runs Reinach Superpro Sportcenter, if ever you’re in Basel, you should check it out. Follow Shemsi Beqiri on Instragram.