Nice that the Jays got a win against Logan Gilbert, the ace of the Mariners’ staff so far this season.

Make 'em do laps around the field. And lots of push ups. DO SOMETHING!!!

They need a reliable count working walk machine at the top of the lineup. Thus the interest in Soto - 145 walks last year 32 this year.

We are making it too easy for good pitchers, their strategy is simple with our swat or strikeout approach.

Soto wont get walked half as much when they automate the strikezone by height. He’s a modern day ricky henderson with his crouched stance tricking brainless umps

true, but for this season to salvage something?

I’ll take it. He knows how to lay off pitches and work umps, until the robot overlords take over. That’s our need.

Maybe his adjusted approach he learned in the minors will rub off on some of the guys who chase.

Soto evolved to survive, some of our guys need to make that click.

Im sure he’ll still walk at an above average rate. But he definitely games the strikezone by crouching

Whatever butters the toast at this point.

How much are the Jays going to give up to land Juan Soto? That would cost quite a haul for a short-term rental, a Lamborghini.

I won’t believe it until it happens anyway. Apparently Buster Olney is the source of that speculation. He’s plugged in, but he’s been wrong about plenty before.

They don’t walk enough, is a real problem, whether it’s Soto or someone else it’s an unbalanced roster that even if they eek out a wildcard does not have the strategic patience at the plate to make ace pitchers word hard enough.

This isn’t a statement like “Play more small ball”, it’s more about good pitchers not caring about solo home runs but when there’s a runner on first with patience and speed, now they have a reason to adjust. Whether it’s Soto or some other count worker, they need a consistent threat to make the pitcher sweat a runner early on.

The hitting in scoring position improving will even them out more, but they still need more runners on base early.

Only two are above .500, one barely and the other is Tampa Bay the great exception to prove the rule on many things in the game. Where Toronto sits is all last or next to last place teams in their divisions. 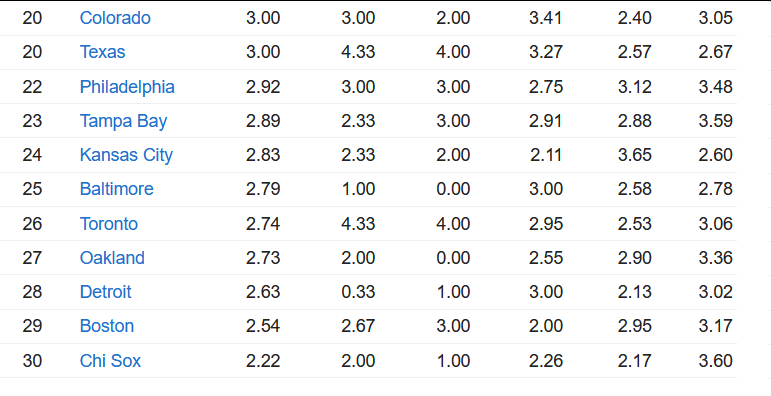 Biggio and Kirk. Jays have Moreno…

I don’t think there’s a chance in the world that the Nats accept Biggio and Kirk for Soto. The payoff would have to be much bigger than that.

That’s almost as bad, or worse than your Chapman for MVP prediction, lol

One can dream can’t they ?

I think since Biggio came up at the same time as Vlad and Bo, they forget he’s already 27 years old.

Is there anybody else in the bigs right now throwing 30-40 pitches a start over 100 mph?

He could be a real force in a few years if he can locate his pitches consistently. The lack of control is his biggest issue.

That said, he threw a no-hitter earlier this week and LOST, only because the crappy Reds allowed the game’s only run to score late on an error.

Is there anybody else in the bigs right now throwing 30-40 pitches a start over 100 mph?

He started the season like shit, getting lit up all the time, but it is almost like a switch flipped, and his last few outings has been doing very well.