Jasmine Tridevil may look like something out of Total Recall, but as hard as it is to believe, she’s a real, living person with three breasts—and big dreams.

The 21-year-old, whose first name is obviously not Jasmine “Tridevil,” spent $20,000 on the procedure and has since been disowned by her mother as a result.

“I got it because I wanted to make myself unattractive to men,” she told Orlando radio station 104.1. “Because I don’t want to date anymore… I’m dumping every penny I have into this. If this doesn’t work, I’m through.”Luckily, she has a plan for her new body. She’s currently employing a full-time camera crew—out of pocket—but hopes MTV will be interested in buying the footage for a reality show.

“My whole dream is to get this show on MTV,” she told the radio station.

In case you were wondering, it wasn’t easy to find a doc who would agree to perform such an unusual and unnecessary surgery. After speaking to more than 50 doctors, the doctor who completed the surgery insisted she sign a non-disclosure agreement.

SHOULD HAVE SPENT THE MONEY TO FIX HER LAZY EYE. 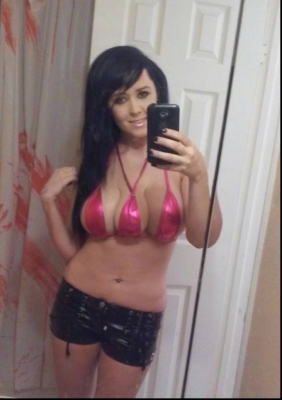 So are the outers naturals? If so that's gonna look like hell in a few years when gravity takes hold of those and the runt is all perky hanging out over the bags of sand.

What a fucking joke LOL. If she didn't want to attract men, she should have cut her tits off completely. Adding another one just makes fucking her a conquest or experiment. Definitely not a deterrent.

This is just too good to not post in this thread as well..

This is a question posed in the video I posted above and answered by her. It's just so fucking dumb I can't even... mind bottled.

Question: Are you aware of Tina Ryder who did something similar in the 90's?

Response: No, I've never heard of Tina Ryder. I know I'm friends with her on Facebook, but I had no idea she did something similar.

I'll bet a nickel that it's all bullshit.

Dumb as a bag of hammers.

Wasn't she is Total Recall?

This is a trend I can really buckle down and fuck.