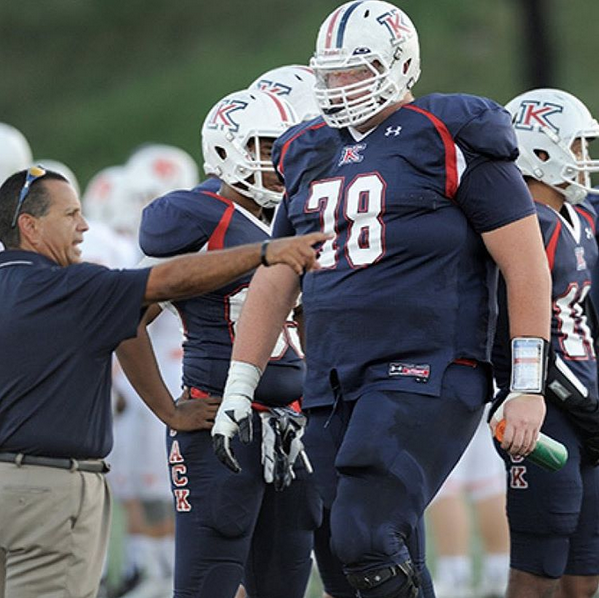 Pointing to the year he was born

I would think that is too big

His 40 is a 6 flat. He benches 350lbs(max lift) squats 450lbs. A family of giants, Dad is 6'5", Mom is over 6", Uncle is 6'11". Kids been ejected in 3 games from fights so he is aggressive. If you could increase his strength he could be a decent Nose Guard/run stopper because no one should be able to move him.

That's terrible strength for a 440lb person , I understand he's in hs but we've had plenty of high school kids come through our gym who put up similar or better numbers who weigh 200lbs less

Baylor has a kid that's over 400 pounds and they even line him up in the I formation and he's caught TD passes in games before. Can't recall the name, but dude is fun to watch.

His poor joints won't survive at that weight.

CMX - That's terrible strength for a 440lb person , I understand he's in hs but we've had plenty of high school kids come through our gym who put up similar or better numbers who weigh 200lbs less

I agree at strength to wt. but that is a lot of weight for someone that's 7 foot.

He's too tall to be good in the nfl.

And a six second 40 is just pathetic. His 5 yard time better be off the fucking charts if he wants to have any future beyond being someone's project in college.

Who knows, maybe he's just suffered from not having a good S&C program and a coach who lets him get by on just his size. But even with his reach, he's too slow for any NCAA offensive line position, and other than as a nose guard, he's too damn slow for any d-line as well. Even that's not ideal, because with his height, he'll get a good center in his chest and under his pads easy.

He'll go Juco and that will be it.

Seems fucked up to say this about a high schooler, but if he doesn't drop serious weight he'll be lucky to live to age 40.

Its harder to raise your bench with longer arms, and factor his weight into the squat. No qb wants to have a 6'9 dude standing in front of him on a passing play, but its happened.

A fat fuck that can't run

the sport of elite level athletes

I bet you someone gives him a full ride, just based on his size. That use to kill me back in the day as a former undersized o-lineman/d-lineman. Guys I killed on the field got full rides somewhere, and I never got a serious look past a couple of NAIA schools.

6 second 40 isnt that bad for that big of a hs kid. Nfl prospects run low to mid 5s, he could get there with hard work. Needs to lose 100 pounds too.

as a HS kid his dad and mom should be working to get his weight down, he needs to around 300 max

we had a super heavy weight wrestler who was 6'7'' 300lbs during football season, he wrestled at 250. This kid looks to be his size. This kid will be a diabetic in a few years if his parents don't step in and help him.