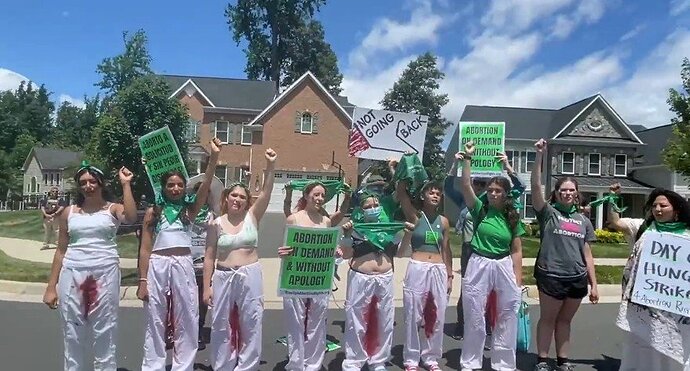 The illegal protests continue outside the homes of Supreme Court Justices, while Washington refuses to speak out against the actions

We get it you want body autonomy, but do you have to be so disgusting about it?

Have some fucking self respect.

If it’s not actual abortion blood then it’s totally unauthentic.

There’s a group in my area that holds up huge signs with graphic images of aborted fetuses, all up & down a major street. It go for 2 blocks & starts at some building that I assume houses an abortion clinic. I’ve driven past it 3-4 times over the past few years, and it’s brutal. Always on a Saturday, when tons of cars are driving past. I have no idea how they get away with showing that shit to thousands of kids.

Didn’t they smear shit and blood on a car hood last year too… or was that just one of my late night fantasies?

FYI there is a state law in VA which prohibits these types of protests.

Ask yourself why the REPUBLICAN GOVERNOR of VA hasn’t done anything about these illegal demonstrations.

Instead, the REPUBLICAN GOVERNOR of VA has just asked DOJ for help, even though DOJ has made it clear they don’t care.

Youngkin, where you at??

Wow, what a huge turnout!!!

So brave of those 10 girls to protest.

I have no idea how they get away with showing that shit to thousands of kids.

Imagine the kids that never get a chance to see it at all.

Wonder if they felt the same way about mandatory vaccinations

They have body autonomy. They are free not to get pregnant all they have to do is follow the directions on the box of bc pills or the condom box. Or even better don’t have sex with every random dude you see.

Of course they didn’t.

Maybe because holding a sign of a murdered baby is still not as bad as actually murdering a baby.

It’s amazing how ardently people will defend the right to be an irresponsible whore.

Does this also apply to men or are we just going to be hypocrites when we make statements like this?

Maybe we should just make women cover themselves up since we are animals that can’t control ourselves and make sure all women dress modestly since we have no self control.

The day I’m able to abort my own pregnancy is the day the apocalypse is truly upon us. Although, given your leanings, I’m sure you believe “men” are capable of giving birth.