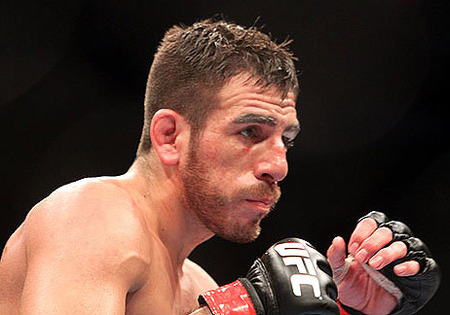 Perhaps the third time will indeed be the charm for Kenny Florian.

Fresh off his winning 145-pound debut over Diego Nunes at UFC 131 this past weekend, the former two-time lightweight number one contender was "more than likely" assured a title shot against division champion Jose Aldo.

It appears word travels fast back to Brazil.

Aldo today revealed that not only does he expect to defend his belt against Florian next, but it will likely happen sometime in October.

He shares the news with Sensei SporTV (via ESPN.com):

"I think it’ll be a tough fight. I don’t doubt that. Florian’s name and reputation in the U.S. will make this fight marketable, so I think he’ll be my next opponent, probably in October."

Emphasis on "name" -- there aren't many of them bigger than "Ken Flo" at featherweight at this time. He was the runner up from the original The Ultimate Fighter (TUF) Finale, losing a middleweight (40 pounds heavier) fight to tournament winner Diego Sanchez.

Since that time, Florian has competed 15 times inside the Octagon in three additional weight classes, challenging 155-pound champions Sean Sherk and BJ Penn along the way, losing both bouts via decision and submission, respectively.

His heavy promotional work throughout the years, as well as fill-in ringside announcer and ESPN analyst, give him the edge over just about anyone in the division not named Chad Mendes. However, "Money" opted to not wait for Aldo -- who's recovering from a neck injury -- and fight Rani Yahya at UFC 133 in August instead.

He'll likely hear no complaints from a title-starved Florian.

Of course, the promotion has not yet issued an official announcement. However, if it is booked for October, it will likely take place at UFC 136 on Oct. 8 or UFC 137 on Oct. 29.

Kenny Florian looked so great at one point. I think it was his fight against Dokonjonosuke Mishima where his muay thai just looked so crisp and on point. That combined with the fact he was a BJJ champion before ever learning any stand up fighting, made him VERY promising as a fighter at any weight class.

I'm not sure what it is exactly, but Kenflo hasn't had that swagger he used to carry with him. I actually used to dislike the guy, nothing personal, but over time I became a fan from watching him improve!

I don't agree with Dana's words that Kenflo "chokes" in big fights. I simply believe he just gets defeated in big fights and there's nothing else he really could have done (Ex. Penn & Maynard fights).

I hate to say it but I think Kenny has reached his peak. He has fought for 2 belts in his past, he has drifted down 4 weigh classes, he has changed training camps (even though he was winning at Delagrotte's), he's sending out cryptic tweets like "I don't know how much longer my body can take this, the drive just isn't there".

I just don't understand what he's going through right now. I'd like to see how Kenny fares at 145 against Aldo, but honestly, I'd rather fight Edgar at LW than Aldo at FW!

Aldo is going to make short work of Kenny.

Aldo should not have too many problems with this fight.

303 - Aldo should not have too many problems with this fight.

don't think kenny will win, but I don't think Aldo will run through him that easily.  i think kenny's style matches up pretty well with Aldo's imo

I think Aldo is gonna starch Kenny, and it won't be pretty.

Good that Aldo isn't taking him lightly but I see him completely smashing Kenny.

Is it me or does anyone agree with what I said above?


Kenny has evolved, but so has the competition.


u were dead on IMO


Nothing to do with evolution. He lost to Penn, the GOAT, and Maynard, one of the top current lightweights (who is also undefeated since TUF).

Losing to Aldo, a top 3 p4p fighter, would also be nothing surprising.

I was impressed with his timing from transition to takedown in his last fight. Will be interesting to see if he can initiate a ground fight with Aldo.

Unfortunatley Kenny Florian is not a Champion caliber fighter. For some reason he never performs up to his potential in championship matches. Maybe this time around he can learn from experience and not fold under pressure.

That being said I expect this to be one of Jose Aldo's easiest matches. Most likely this fight will end in the first round by KO or SUB. Whatever Aldo wants pretty much.

NarlyPersianDude - One of the stupidest things said in MMA was Dana White being unclassy and saying Kenny chokes. Just makes no sense. He simply lost to better fighters. And I cant believe how many people think Aldo is just gonna blast Kenny. Do people not understand how much fresher Kenny will be next weightcut. I do expect Aldo to win, but it's a dangerous fight for him. Kenny is a lot better than Mark Hominick. The only thing Hominick has on Kenny, is techincal striking and Kenny is very technical. And a good overall striker, and much better mma fighter. This is the toughest fight of Aldo's career. Kenny has a very adept mma game. He is good in many places a fight can go. He can take a asskicking and stay in the fight, and he tends to get stronger the more the fight goes.

Like I said, I expect Aldo to win, but it wont be easy. Aldo himself knows this.

Ok glad I'm not the only one confused about Kenny.

Magnum TA - I was impressed with his timing from transition to takedown in his last fight. Will be interesting to see if he can initiate a ground fight with Aldo.

Kenny did look good against Nunes for sure.. but honestly I really don't know anything about Nunes, I've only seen the Brown fight and a few more at most. Time will tell how he does, he looks to be physically gifted and athletic.

I'm extremely torn in this fight. I really don't want to see Florian go 0/3 in title shots. But I also think Aldo is one of the best fighters to every step in the cage and I want to see him go on a tear and prove it.

I'll definitely enjoy this fight. It will put a pit on my stomach either way. I just hope it doesn't go to a lackluster decision.

it's gonna be a great fight