Aldo fires back at Khabib over criticism 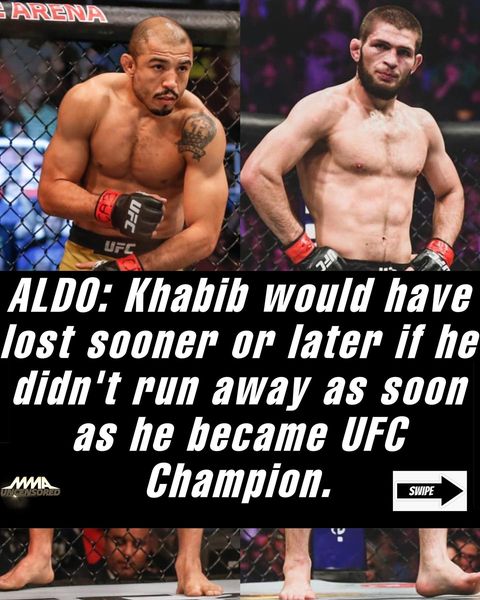 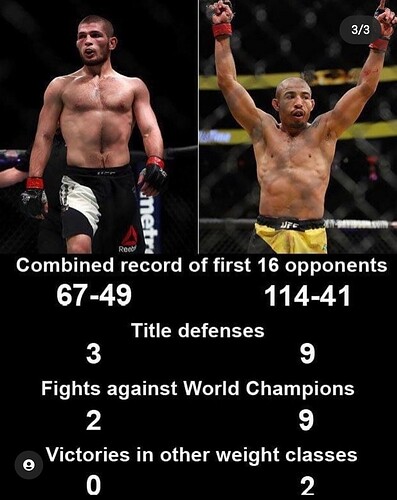 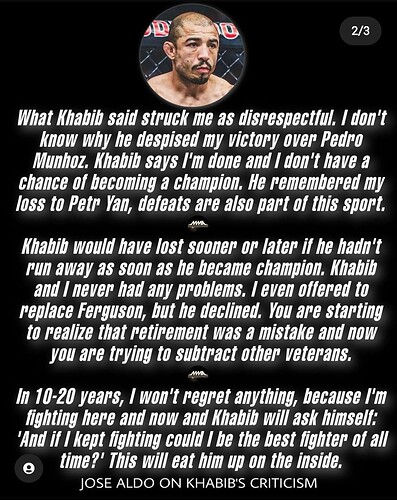 He’s right and deep down everybody knows it.

Aldo speaks the truth. A true legend unlike Khabib

He’s right and deep down everybody knows it.

100 percent. The fact that Aldo is still trying to claw his way to a belt makes me respect him more. He’s shown us what he’s made of.

You can’t be GOAT based off potential and What ifs. Khabib blew it

Those stats say it all IMO. Khabib had his chance to make it about the legacy, not the record, and he chose his record. Just my 2ç

When the rumor hit that Aldo wanted to step in to fight Khabib people didn’t know what the fuck to think. Of anybody moving up his matchup with Khabib would’ve caused problems in my hypothetical opinion…

Daaaaang. So Khabib turned down a smaller guy in Aldo?

No one can argue with the record comparison here.

Khabib been coming across as a salty little unlikeable bitch ever since he got matched up with Conor.

Khabib is from a different place and was raised differently. Different culture, different religion, different values.

I have a feeling Khabib doesn’t like America in most aspects. He is definitely friends with a lot of Americans like DC for sure but I think Khabib hates the West. After seeing the Conor vs Kelly thread and all the freakshow clowns at that award show, I don’t blame Khabib one bit. America is on some Babylon, Sodom and Gomorrah Biblical type shit. Even the Christans in America are wack. Brazil isn’t too far off with their crazy sexually explicit festivals either.

Khabib came here for sport but had to deal with the circus aspect of it all too. He came, he conquered, and he GTFO…

Yeah, he thinks it’s ok to kill people if they draw his pedo prophet. All of his other opinions are moot at that point.

Deep down? It’d right out in the open for all to see! Fuck that backwards ass caveman!

Except he’s a career 145er, who cuts even lower now. Khabib would’ve position fucked him to a decision.

Just as Conor’s size at featherweight contributed to his success, so did Khabib’s at lightweight. Not taking away from either’s skills.

All sizes equal. Prime Aldo spanks Khabib. But it’s irrelevant because it is not reality

Khabib trying to create the Rickson / Bruce Lee mystique. Anyone that afraid of losing doesn’t have my respect as a fighter

Khabib never should have opened his mouth about Aldo. He’s one of the best and most respectful Champs the sport has ever seen. Khabib was that as well and still is in my book but as of late he has been running his trap way too often. Especially about things that have absolutely nothing to do with him.

Yeah, the whole cutting for an advantage argument used against Khabib is a tired excuse. 90% of the top Champs of past, present and future use weight cutting to their advantage.

Al Iaquinta. Did Aldo ever beat Al Iaquinta at Madison Square Garden for a vacant title on short notice?..

I didn’t think so.