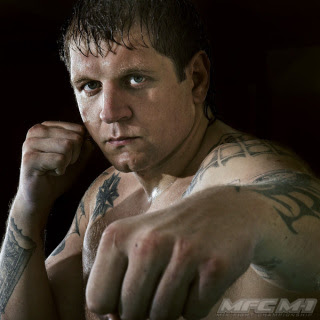 According to an interview with Fighters Only Magazine, Aleksander Emelianenko (13-3) confirmed that he will be making his MMA debut on American soil come the Affliction PPV in January.

"The Russian heavyweight revealed that he will be heading to the USA soon to film promotional videos for the event.


“I am going back to the States next week to do interviews and make some film for the January event,” he said.


CSAC never revealed a specific reason for the removal but rumours circulated that Emelianenko had been found to have Hepatitis B.

“That is not true, these rumours about medical problems are not true,” he stated. “I was removed from the card because of problems with my paperwork.”


“My visa came late for the USA, I arrived two days late and it meant that I could not complete necessary paperwork on time.


“But there will be no problem this time - everything is cool."

Aleksander Emelianenko will likely face either his original opponent for Affliction BANNED, Paul Buentello or he will face Josh Barnett who approached Aleksander backstage during the July PPV and challenged him in dramatic fashion.


Both Paul Buentello and Josh Barnett are left without opponents after the original plans for the October 11th card that featured Paul Buentello vs. Roy Nelson and Josh Barnett vs. Andrei Arlovski were scrapped. Roy Nelson, Buetello's original opponenet, is set to face Arlovski, Barnett's original opponent, during EliteXC HEAT on October 4th. According to Tom Atencio the winner of that CBS Nelson vs. Arlovski fight will face Fedor Emelianenko for the WAMMA title come January. Stay tuned for any official annoucements concerning Aleksanders' opponent.


iknorite...but look at the website that's trying to start the drama...AfflictionGoldenBoy.com

heh.... As much as i like Barnett i don't want to say anything negative about the guy but he kind of came across in a not so good way in the video.

OmegaPoon - Was it Kizer or someone else that said something like "He will not be allowed to fight in the US?"

Would love some clarification.

What does Affliction have against making Barnett vs Fedor?

It seems that even from a marketing standpoint, it would be the fight to make. USA vs Russia rather than Russia vs Russia? Guy with wins over BOTH current UFC heavyweight champions as opposed to Arlovski who lost twice to the guy Fedor just destroyed in seconds? Funny guy with pro-wrestler style mic skills as opposed to (in a high voice) "How's taste my big pee pee?"

I hope it is true, love watching Aleks fight

I fail to see how Barnett came out as an ass. He was only a straight shooter IMO.

As for Aleks medical clearings, that needs to be addressed once and for all. Will he ever be allowed to fight in sanctioned bouts or not?