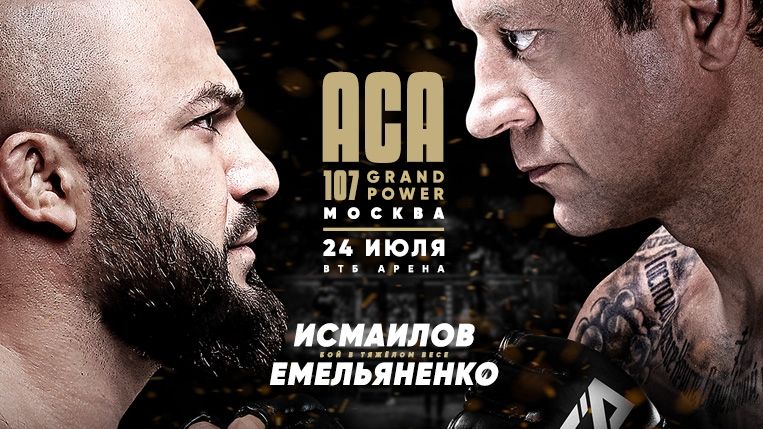 We waited, waited, and waited - on July 24, ice and fire will converge, the odious heavyweight Alexander Emelianenko will fight with the gassing 24/7 middleweight Magomed Ismailov. All this will be packed with battles in the full-fledged ACA 107 tournament and will be held in Sochi with empty stands.

38-year-old Emelianenko (28-7-1) has not played in MMA since August 2018, when he drew a fight with Tony Johnson at WFCA 50. At the end of November last year, he knocked out strongman Mikhail Koklyaev in a boxing match and became the “champion of REN -TV ”, together with the indicated TV channel, breaking through the bottom of friks and trash.

34-year-old Ismailov (15-2-1) last September at ACA 99 beat former M-1 Global champion Artem Frolov. A few months before that, he spectacularly knocked out Vyacheslav Vasilevsky. And even earlier, Magomed took a bullshit draw in a match with Vladimir Mineev at the FNG 90 show.

The fight is notable for the fact that Emelianenko is a heavyweight 191 cm tall, and Ismailov is an average weight 175 cm tall. In fact, a miss-match, but a box office, plus there is a chance that “Isma” will drag Emelianenko to the ground ... how he will continue to hold the heavy weight there is an open question. Such a paradoxical intrigue with its obvious absence, something like watching a video like "Bear vs. Crane" on YouTube - the outcome is obvious, but you watch it to the end.

The rest of the card can be noted with the return home of the Chechen Magomed Bibulatov, who previously played in the UFC.

The broadcast will begin on July 24 at 18.00 Moscow time. There will be only one way to watch the tournament live - by purchasing the broadcast for 399 rubles on the official website of the ACA league. The next day, the show will be replayed by MATCH TV.

However, ACA's broadcasts are traditionally a weak point, and it is possible that paid air will eventually be shown for free on YouTube, as has happened more than once. Therefore, we are going to ValeTudo.ru on the 24th, watching and discussing!

Nice. Thanks for posting.

Does/did Aleks even train at this point? That was horrific. He looked like a guy off the street.

That was a beating

Wow he got got the shit kicked out of him. He got rocked right off the bat when the other dude came out bobbing weaving like a spaz and never recovered.

Not training any wrestling for a decade like Aleks doesn’t help either.

Yeah, that was as one sided as it gets. Little dude is a beast.

Any way to watch it now?

Why would anyone send him out after round 1? He was clearly ko’d

that was horrific to watch

I missed it, damn! Now I really wish they had made the match between Aleks and Tyson, that would have been fun to watch.

Just saw Sadulaev post a picture on IG with Magomed after the fight.

Some elite level wrestling, even in the second round Aleksander hit a nice sprawl but Magomed just went out the back door and dumped him like nothing.

Why would anyone send him out after round 1? He was clearly ko’d

that was horrific to watch

Yeah he was completely out with those strikes on the ground right before the bell. Shit was brutal.

SergesBeefyHopeFlaps - Any way to watch it now?