Alex pisses off all the right people. Go cry in Don Lemon’s lap 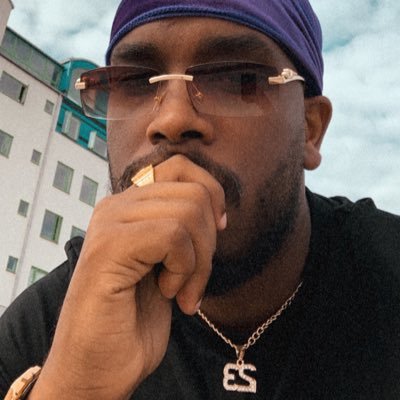 @vibesmma
Can we all just collectively move past the need for Jake Shields? I’m tired https://t.co/x5vk5s451q 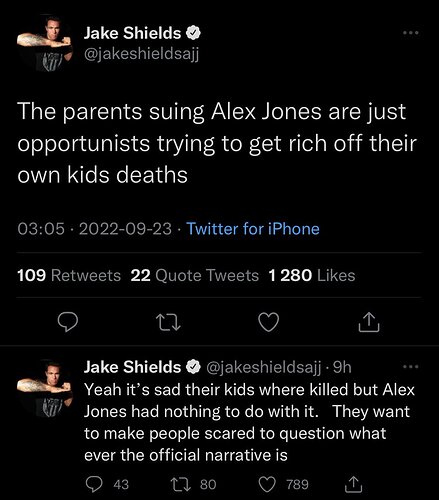 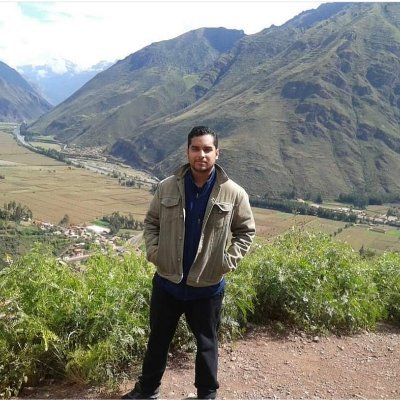 @Steven_Avalos
Jake Shields is an incredibly stupid person even by fighter standards. twitter.com/ekc/status/157…

The looney account is a troll right? That cant be a real person. 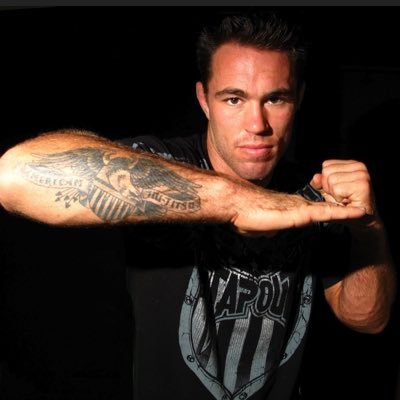 @jakeshieldsajj
One Justice system for career criminals and liberals and another for the hard working citizens and conservatives
2 Likes
Eskimo September 23, 2022, 10:31pm #247

He’s only able to do that because those parents chose this path. I personally think it’s odd that they chose to sue him, rather than just let this all fade away. If they thought they were somehow going to punish him they’re morons. They probably got talked into this by that scummy little lawyer and now they get to suffer through all this and relive the whole thing. I feel sorry for them but I question this decision. If it were my kid I’d want to never talk about it again.

That’s sad. After your child is murdered, a grifter with a national audience says it didn’t happen, that you are a paid actor, and encourages people to.stalk and threaten you in real life. And even doxxed you.

And you’d just let him get away with it.

I am actually surprised that none of them have found Alex and put a few rounds in his spine and face, leaving him a blind cripple.

Because that would be real justice

^ I’m in line with you on that thinking. Those fucking cukes who follow this retard were harrassing these people during the worst time imaginable. Fuck that guy and his weirdo followers. I get that some people are interested in what he has to say, and fair enough, but I’m talking about the real whack jobs, of which he has plenty… the kind who would go to such lengths as to harrass grieving parents and accuse them of lying about their kids being murdered. That’s some low life, nasty bullshit. No fucking way would I be able to ignore that shit if I could take this cunt to the cleaners.

^ so none of you appreciate free speech. Or you dont recognise what it is.
Honestly, the problem everyone has is they’re thinking past the sale. They’re believing the same BS news that preaches WMD’s in iraq and russian collusion hoax , whilst still not acknowledging the SCANDLES that get ignored. Such as the CIA being in partnership with bush and clinton to import cocain by the tons. Or the CIA involvmen with the Saudis for 9/11.
The problem with people (us) is were to trusting. We’d like to think nobody would lie about their kids being killd , but at the same time it’s apparent that crisis actors are real, they have been used, and the FBI / CIA have had their grubby fingerprints all over this shit for years.
Meanwhile big tech is flat out scrubbshit from the internet.
Look at the boston bombing and tell me how shredded pants man was doing his thing seconds after the explosion.
Telle why Jesse Jackson didn’t wear a tie.
What’s operation gladio?
Now tell me about free speech and why people who indulge that apparent freedom are persecuted.

First production run will be “the monica”. Tobacco scented, of course.

Maybe next will be “grab her by the pussy” salmon scented candles.

Look at the boston bombing and tell me how shredded pants man was doing his thing seconds after the explosion.

He was cutting off parts of his pants legs and using them as Tourniquets.

No
This was secons after the incident…

Cool slits in his shirt…
Dose anyone actually believe that shit.
Once upon a time there’d be some YouTube fortro verify.
Nothing’s there now but propaganda and lin wing.
That says everything you should need to know about that

It was a very fast reaction to help injured people, not some outlandish conspiracy.

They got em . They maight as well use em.
Clinton neber snoffed a lime either, let alone the coke racket him and bush had

I honestly don’t know what you’re trying to say.
Are you saying the Boston bombing was a hoax, had crisis actors or it happened but was an inside job?
You’re the one that brought it up, just lay it out, in your opinion what happened there.

All the people involved were not actually injured. The feds were involved, and as usual there was was a drill . The drill went live. The bombs that went off were more loke smoke bombs that went straight up rather than the kind that were ment to kill with shrapnel going out laterally
Nothing abot that was organic,nor the way the media presented it was what happened.
They even went in to clear a blue bag that was the apparent bomb , after it was not there but before it suddenly appeared, and the explanation for that was it must’ve been sucked back into the blast.
It was all totally orchestrated bullshit. That’s why I’m skeptical of sandy hook , because that was fake as fuck.

Crisis actors are very real, just not what you think they are.