he fatal shootings at the Washington Navy Yard are evidence that Congress is “shirking its responsibility” on the gun debate, Sen. Dianne Feinstein said Monday.

The California Democrat said the type of guns allegedly used by the shooter, including an AR-15, were evidence that Congress needs to do more. Earlier this year, a bipartisan proposal to expand background checks failed in the Senate by a narrow margin, while an assault weapons ban from Feinstein was also defeated.

“This is one more event to add to the litany of massacres that occur when a deranged person or grievance killer is able to obtain multiple weapons—including a military-style assault rifle—and kill many people in a short amount of time. When will enough be enough?” Feinstein asked in a statement.

She added: “Congress must stop shirking its responsibility and resume a thoughtful debate on gun violence in this country. We must do more to stop this endless loss of life.”
Vice President Joe Biden and Senate Majority Leader Harry Reid have spoken about trying to revive the background checks measure from Sens. Pat Toomey (R-Pa.) and Joe Manchin (D-W.Va.), but that effort has yet to come to fruition.
Feinstein was the first prominent politician to draw a bright line from the shooting to the congressional gun debate on Monday, though Sen. Jay Rockefeller (D-W. Va.) also made a less direct reference to the subject on Monday afternoon.

“We are becoming far too familiar with senseless, tragic violence,” Rockefeller said. “These repeated incidents demand our attention.”

The irony will forever be lost on her...

Before I opened this I already knew what it was. 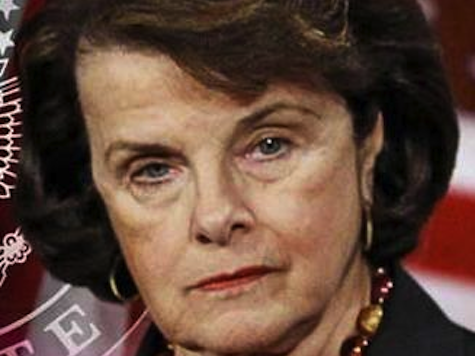 I'm indifferent to guns. If all projectile weapons were banned tomorrow, it would have zero immediate effect on my life.

That said, it's pretty clear that she's full of shit when she invites congress to enter a "thoughtful debate on gun violence."

To use an example: after Sandy Hook, anti-gun politicians said we needed to "start a conversation on gun control."

-Pro-gun politicians and lobbies, taking the "debate" comment seriously, presented a mountain of evidence showing that the proposed legislation would likely be ineffective, and that many of the guns targeted hadn't been used in the shooting- or any recent mass shooting.

If Sandy Hook didn't do it, today's tragedy won't

Goddamn California get your shit together and get rid of that fucking hag already.

Phuckles - Before I opened this I already knew what it was.

jdsga - Goddamn California get your shit together and get rid of that fucking hag already.

jdsga - Goddamn California get your shit together and get rid of that fucking hag already.

As a Ca resident, I apologize for that idiot. I can't stand her. She needs to go.