Van Roosmalen won the belt at G18 in November 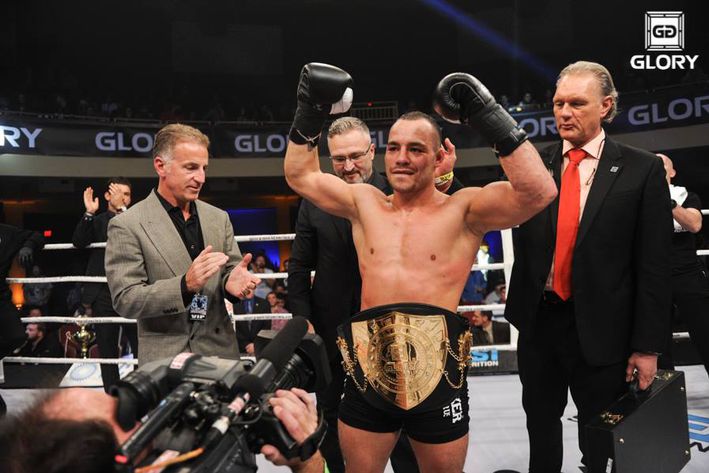 Ristie did this at G17 to Ky Hollenbeck

Ristie did this to Van Roosmalen when they met at G12

Now the big rematch is on. This time it's not a tournament final and the world title belt is on the line.

Looking forward to it!!!

Glory 20 is stacked. Can't wait to see Varga take the title in the main event and prove he is the best in the world at his weight.

Roosmalen is a beast at backing people up with his combinations, however ristie the far more aggressive fighter with heavier hands.
Roosmalen is going to get backed up against his will and KOd again, unless Van can survive until the later rounds where I see the only chance of him winning.

how about adding Daniel Ghita vs Badr Hari to Glory 20

brahmabull81 - Hope Robin can make the adjustments and get it done this time. Hes probably my favorite kickboxer currently. Its fucking rad that his dad KOd Vitaly Klitschko back in the day..

Great use of gifs, I was already excited for this fight, but seeing all the backstory in one post has me anticipating it even more.

That's how you build up a fight. Good fucking job.

No trilogy should end in 6 months.

yes i am ready for some good kickboxing. Any news on Tyrone Sponge's recovery?

Tyson Sponge, as Rashad once called him when he very first joined the Blackzilians, is healed from his snapped shin but is pursuing a slow timeline on returning to kickboxing. The training and the fighting in our game requires a lot of shin on shin contact, much moreso than MMA, and it makes sense for Tyrone to give his bones a long time to heal properly.

Accordingly, he will be pursuing some professional boxing endeavors in the latter part of 2015 and you should see some news coming out about that in the coming months. Tyrone has always aspired to be a three-sport athlete and professional boxing remains his final frontier so this is a perfect time for him to focus on that.

We will see him back in the GLORY ring but only once fully healed; in the meantime we look forward to seeing him tear it up under Marquess of Queensbury rules and we wish him all the best for his professional boxing activities!

NatualBornTickler - Roosmalen is a beast at backing people up with his combinations, however ristie the far more aggressive fighter with heavier hands.
Roosmalen is going to get backed up against his will and KOd again, unless Van can survive until the later rounds where I see the only chance of him winning.

Petrosyan took 2014 to heal his badly broken hands and returned to the ring earlier this year with a win in Italy. In April he will fight on the Oktagon Milan 20th Anniversary show against Enriko Kehl, a very tough fight. Oktagon is his manager carlo diBlasi's show and the fact it is celebrating its 20th anniversary says it all; all credit to him.

If all goes well vs Kehl and there's no reccurence of the hand injury, we would hope to see Giorgio back in the GLORY ring towards Q3 or Q4 of this year, probably in a European show. He remains pound-for-pound one of the greatest of all time - if not the greatest - but he has a loss to Ristie to avenge and the world title belt is not around his waist. Those are the kind of challenges a championship athlete like Petrosyan thrives on; The Doctor will be back in surgery in 2015, no doubt.

Daniel is a top contender and a friend of GLORY; right now he is exploring some options and weighing up his next move, he is a very popular fighter and much in demand around the world. He's the kind of guy who wakes up to an inbox full of marquee showcase offers at very preferential rates, so he's probably got a lot of proposals to sift through right now. Keep an eye on his social media for breaking news.

Badr Hari is another big popular name. He is particularly popular in the Middle East and has a relationship with a promotion there which seems likely to occupy him for the near future. He also took a considerable break from competition - for obvious reasons -and so is still in the process of regaining peak competition form. Never say never, but no news at this time.

JohnMc1 - Are you finally going to have another London show this year? You guys have been jerking us around about it for 2 years now.

It's not a case of jerking people around, it's just that there are so many moving parts when it comes to putting an event together that plans can change repeatedly. We've been in the process of a London event-build several times since GLORY 5 and then had to switch plans due to various reasons - TV slots, venue availability, fighter availability, so on.

London was a fantastic show, probably the best of our early batch of events, and we all know that UK fight fans are among the best in the world. London is constantly on the list of destinations we want to revisit; it's just a case of getting all the ducks in a row.

It might be worth mentioning that even if London doesn't come off this year, we will be in Western Europe somewhere. Paris, Amsterdam and Milan are all but a short hop from the UK via a budget airline. Obviously one of those destinations would add a touch more expense to the outing than just a trip to London but at the same time, it's a great excuse for a weekend away ;)

I hope Glory sticks around for the long hall.

I always ask you when you're coming to the NYC/NJ area and you always hide from me! Please come here, I need to watch Glory live!