Antonio McKee questions Pitbull's muscle because he not black

Maybe Pitbull cycles gear, maybe not. I just watch fights and try to ignore the drug and drug testing stuff but I was unaware that you had to be black to carry a lot of muscle at 34 years of age, interesting…

Best fight in Bellator history if you want to talk homegrown talent. Looking forward to it.

“Only thing we worried about is making sure USADA steps in, making sure these fighters do drug tests, because a fighter being at his age, not accusing him of anything, but I look at pictures of him now and I look at pictures of him in the past. I’m a 51 year old man and you see this I’m yaked up and this is all natural hard work but let me tell you something, to maintain that muscle genetically, its a lot harder for others vs people of color, not to bring color into it but genetically it is a little different so I’m just looking forward to USADA making sure we get those good tests and everything is great because we are going to pass all the tests” Well there goes every bit of respect I had for him.

He has a point albeit a pretty weak one. It’s interesting to discuss race but impossible in the current political landscape

Pitbull is Brazilian so wtf is he talking about

Yeah he doesn’t understand what a person of color is, but no one accused him of being smart.

“White people ain’t never got no muscles without steroids”

Man that guy who wears those stupid glasses is cringy. He is obviously reading his lines off a prompter too. Ive seen him behind the scenes and know people who lived with him at the olympic training center, he is a tryhard.

He has a point albeit a pretty weak one. It’s interesting to discuss race but impossible in the current political landscape

Pitbull is a person of color, I have no idea how he thought any of what he said made sense, it is one of the stupidest things I’ve ever read.

So not only is Pitbull too jacked while not being black enough but now black fighters are paid less due to the color of their skin.

So wait a minute, AJ, a kid who has never won a tournament and never won a world title has as many if not more accolades than the reigning FW/LW champion who has won two Bellator tournaments and made it to three tournaments finals before the current GP. Pitbull also has won the FW world title two times, the LW title one time and has seven title defenses. So the kid who has been brought along slowly by choice has as many accolades?

There is a reason nobody has heard of or can remember the first eleven fighters AJ beat in Bellator, the promotion let him crush cans to mature and develop his skills. Bellator signed him before he had a single pro fight. How many other fighers has Bellator allowed to crush so many cans and develop so slowely under contract with them? Not many.

Antonio sounds ridiculous playing the race card in the buildup to this fight. Dude must watch a lot of MSNBC at night or something.

I’m a huge fan of AJ’s skills but he only has 2,400 twitter followers and he has only been fighting tough guys for three years now. Bellator sucks at social media and it looks like his camp does too by those twitter followers.

Great job playing the race card Antonio when AJ has not even cracked 3k twitter followers and Bellator can’t get 5k people in the building while at the same time they often do the same ratings as infomercial reruns. Yeah that makes a lot of sense. 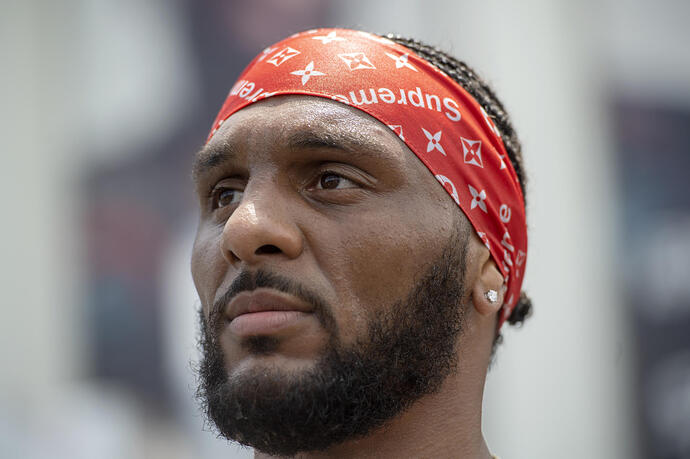 The one thing you can’t say about A.J. McKee, Bellator’s unbeaten homegrown featherweight, is that he doesn’t dream big.

"I’ve been in the game a long time, as you know, and I’ve had my own set of issues with this sport,” said Antonio McKee, who trains his son. “I’m not happy with what Black fighters are being paid. I’ve been very fortunate and I’m very direct. I always tell the truth and a lot of people can’t handle it.

“But as a Black athlete, I don’t feel [A.J.] is paid enough. If it were Randy Couture’s son, he’d have made more money. If it was Chuck Liddell’s. Royce Gracie’s son made more money than my son. … This kid is 17-0, he’s fighting on his home turf, and he has as many if not more accolades as Pitbull. But why are we talking about money?”

This FW GP is my favorite tourny or favorite anything in Bellator history and Pitbull vs McKee is to me the most interesting homegrown fight in Bellator history so thats the only reason I’ve been following the prefight media stuff, nobody really does much of that for most Bellator fights but this one is different. Just so looking forward to this fight its annoying someone is bringing race card bullshit into it.

lol how many people know who Antonio McKee is and want to see his son fight?

And how many ppl know who chuck Liddell and Royce Gracie are?

He has a horrible point. I remember him fighting back in the day but don’t remember him ever fighting in UFC? I wanna say Chris Brennan got him with headlock KO in ifc of KOTC long time ago but it’s been so long and I too lazy to look it up.

He almost seems jealous that he never got the opportunity his son is getting.

Hes jelous because from what i remember he was a boring wrestler who rarely finishes. No wonder there wasnt much interest in him

Cubans, Brazilians and a few other latin countries are known for having some pretty good genetics. Guy sounds like an ignorant racist.

I love how everyone throws around the phrase " people of color" and no one bats an eye. If they had just changed the arrangement of words to “colored people” you are now a racist. This shit is a joke. It’s literally the same group of words. Anyone who panders to this bullshit is a moron.

Dad just needs to shut his mouth and not worry about what his son is doing.

What he’s saying about black people isn’t untrue, btw. It did get Jimmy 'The Greek canceled in 80’a for saying something similar.

Of course white people don’t got no muscles lol