Any of you preparing for political debates at thanksgiving dinner?

Any of you guys on polar opposites politically as some people you’ll be seeing on thanksgiving?? 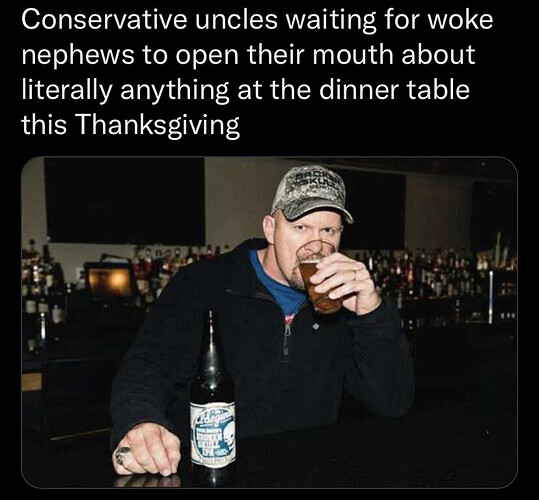 I don’t have anyone opposite. Some don’t like to talk politics at all, I get that.

We will talk some politics though. Because life right now.

At a very large Thanksgiving gathering a likely closeted gay 20 something relative of a non-blood relative of mine had a giant insane meltdown on a straight Republican female boomer over something about Trump and it escalated to all about hating gays or something…I don’t remember the details, I was drinking enough to tolerate being there but it was loud and weird and funny in hindsight.

I’ll get buzzed enough to make it through Thanksgiving, thats always my strategy.

I bet these are some really high level debates you guys get into.

My sister and nieces are hardcore lefties. I have known her husband/ their dad for 40 years and have no idea how he votes. My nieces husband, other sister and her boy friend roll maga. Politics always come up but it’s always civil, it’s never gotten out of hand, not even close. We just don’t let arguments go very far.

No because my family aren’t a bunch of wingnuts thankfully

Last uear my pops said, “you talk politics, i eill fucking end you.” That seemed to work. Assume itz the same this year.

Last uear my pops said, “you talk politics, i eill fucking end you.” That seemed to work. Assume itz the same this year.

Are you already drunk, or typing with an accent?

Anyone who can’t get through a holiday dinner without bringing up contentious politics ought to have their potato mashed. We are inundated by this shit at every turn, so I can’t think of a better time to let it go then a gathering over the holidays with family and friends. There are plenty of other topics to discuss. I don’t recall politics coming up at any dinners I’ve sat through over the years. Not that other irritating crap hasn’t been discussed, but no politics, and sure as fuck no religion.

Any of you guys on polar opposites politically as some people you’ll be seeing on thanksgiving??

I would think there are some uncles sons and sisters that did not get the vaccine. And last year they were not invited to a thanksgiving dinner or had some family not attend theirs

My family is all sane Republicans. I’m sure we’ll laugh about libtards and their pronouns a bit.

Fuck no. Every convo for 5 years w the parents was an unsolicited TDS meltdown, and now that we’re on the brink of nuclear war, gas is over 4 bucks a gallon, the economy is in the gutter, etc., they’ve had a change of heart and no longer want to discuss politics. And ya know what’s weird? I don’t force it on them. Because it’s not polite.

Would have loved to be at that one though.

“Trump hates gays? No shit! EVERYONE hates gays!!!”. Would have gone over well.

No we mostly agree.

Bet they 1) deny and deflect with “but Trump” (this is the lefts go to)… and 2) reflect that they are actually leaving a shit country to you because of their actions (doubtful because most lefties are not capable of introspective assessment and logic).