Anyone done work on their family tree?

You’re probably familiar with it, but there’s a really old Viking site in Newfoundland that goes all the way back to about 1000AD. It’s a pretty interesting site.

Madame Blavatsky? She was an interesting cat… Last Podcast on the Left did a damn good deep dive podcast on her life.

I was doing good work before my Aunt bust in screaming some BS about get off her daughter.

All the movies I watch are such a lie. Thought she would have been proud and taught us some things.

Are you from Midleton specifically, or are you just speaking in general? The Kindred Spirit Monument is so beautiful in it’s simplicity and more tasteful than most Indian monuments in America. Do you know if any Choctaw kids actually go to Ireland to take up the scholarship offer? That’s still a huge issue even today as college attendance is super low. Most reservations are total shit holes… Gangs, drugs, and violent sex crimes/disappearance/murder are terrible and rarely prosecuted because of how jurisdiction works on reservations.

I even read the Irish even raised a couple million for the Hopi and Navajo when they were having their asses kicked by COVID-19. Those nations are fuckin’ scary not because of drugs or crime, but the sheer size of the reservations out there makes it virtually impossible to maintain first world medicine just day to day, much less during an emergency. The Hopi and Navajo still have the occasional Bubonic Plague case.

It’s just cool that such an insignificant act as collecting less than $200 was so we’ll received, and started a friendship that lasts to this day.

My great grandfather led a local KKK chapter in southern Missouri. He also died in mining cave in. Five generations of kin in cemetery is Joplin, MO

Relative served on both sides of civil war

One was a German immigrant who fought vs Indians in 1850s then later served in Union Army as Master Seargent. Career military guy.

Yes they do, I told a friend she should apply for it sometime. I don’t think many have availed of it yet, and I think the latest recipient did it through online lectures due to covid, etc… I’m about an hour away from Middleton, but I’ve seen the monument - it’s absolutely beautiful.

I guess when you’ve nothing to give and you still give it, it means so much more. Probably why we are so thankful for their help. I remember the huge amount of donations that came from Ireland, made me happy.

L’Anse Aux Meadows (sp?) plays into the greatest troll in the history of the world… Leif and his dad couldn’t stop murdering people in guess so we’re cast out of Iceland (a beautiful, but tiny country named Iceland to keep people the fuck away) so Erikson starts a settlement and names the fuckin’ frozen wasteland Greenland so people would immigrate. When people caught on he figured “Fuck it, we’ll keep going”. Then they were hugely outnumbered by hostel tribes so had to get the fuck off their third try at a settlement. Good way to learn to stop killing your damn neighbor over grass clippings on your lawn and shit.

I’m still curious if they at least explored south. Their are many legends about colonists coming across fair skin, and blue eyed Natives. The Vikings could have done like the Highlanders and intermingled with tribes. If you know about the Choctaw you may know Highland trappers banged a ton of eastern natives. The clan structure and tribal structure blended nicely and the Creek, Choctaw and rest of the Tribal Confederacy hated the English as much as the Scots. We ended up having a to of Chiefs with Scot last names. I could talk about how Irish and Scottish culture created the southern culture… I’m taking back “Redneck” and “Hillbilly”. They aren’t derogatory terms really. Redneck referred to Ulster Presbyterians, and Hillbilly referred to supporters of William of Orange. It’s crazy how most Americans don’t know their own history, and how distorted the history we learn in school is… Ok, I’ll shut up now.

My mother’s side is traceable back to 1400s and I have traced my father’s side back to 1800 when my surname moved from the holy Roman empire to Ohio.

My dad had the family tree/crest for his mothers maiden name that went back to 500 ad, I believe. He died and my step mom has never seen it, so who knows where it went.

Yes I noticed that - I’ve a Muscogee friend and half of his family have Mac surnames lol.

I’ve heard my mom’s fsmiky has been there, but I’ve never been to, nor have any plans to visit, newfoundland. I’ll have to settle for GIS pics.

Some distant cousin of mine wrote a 2 volume book in the 1970s on my family name in America. Any American with my last name is descended from one of three brothers who arrived in Massachusetts in the 1630s. According to that book, the name originates around Kent, England and we are vaguely related to Charlemagne (though I think many millions are).

My mother’s side is Eastern European, grandfather born in what is now Belarus (though then it changed hands between Poland and Russia depending on which army marched across their field) and grandmother from Warsaw. They came here in the early 1920s.

Even though I’m pretty honky I look vaguely ethnic and people tend to think I’m half whatever they are. I’d love to do a DNA analysis, I just don’t like having that info out there in the cloud for anyone to find.

I did a lot of research about 3 yrs ago on Ancestry. Found one of my great great grandfather was apart of Cantrell’s (???) Raiders (think that’s the name). Pretty brutal bunch of confederates. Also on my mom’s side. My grandfather (died before I was born). Left his family in TX. to marry my grandmother, when he died they sent her $1000 to sign some forms. She basically signed away generational wealth without realizing it. Like multi-millions. They own oil fields, some smaller newspapers. Kinda crazy, I could’ve been wealthy.

Ancestry is great, you’ll often get lucky there with hints on the family tree from someone who’s already done the hard work. Always worth double-checking every entry though to confirm the info is accurate.

I found a PDF online of my grandmother’s side of the family which went back to 1720. Really helped me with my research and luckily it was well researched and very accurate.

Family all over Europe and some in the US. One family crest takes us back to the mythical founding over a thousand years ago. Obviously that’s more a legend really. The oldest family member I could dig out with name and biography is from shortly before the declaration of Independance. That was quite the moment to be finally able to pin it down.

3-4 generations ago, most of my family was split between eastern and western Europe. The marxists killed almost all Germanic family in the Gulags while curiously enough the racial supremacists made sure all Slavs made it through the war.

Family trees are a bunch of bullshit. Everyone thinks they are part Native American. My family had a damn photo on the wall of this Indian lady, supposed to be my grandma’s grandma. DNA test 100% European. Everyone I know that did that shit thinks they are part Native and gets 0%. And are from some countries they didn’t expect, less of ones they did. People be cheating, lying, remembering wrong.

There’s two reasons for that. The anti White sentiment made people glorify non-white admixture. Some three years ago, a beautiful Norwegian or Swede youtuber broke down in tears in her stream because she turned out to be 100% Scandinavian. The dumb cunt is a killer blond and could wrap almost every man around her little finger but instead of being thankful she had to signal White hatred.

Second of all, North American Indians are highly mixed themselves. During the last three centuries a huge number of Whites went native or were enslaved (they would often be freed at one point). Many of these also fathered a huge number of children. James LaFont compiled many sources on that in his books. The relative high admixture is completely at odds with the established narrative (as is genetics in general) so it’s not talked about.

What scared me is my parents families both claim to have sailed from France though they aren’t French to America at the same time, both wound up on the Kansas/Missouri border, both families moved to the same block in California at the same time. They both took the tests and got like 35% Scottish, 35% German, 20% Scandanavian, 10% Spanish, and people always said they looked like brothers/sisters. Are my parents cousins?

I’m lucky in that my family has all resided in the same area for a few centuries. So it’s been easy to track my family tree. Every lineage has come from within about 25 miles of my house. My DNA on gedmatch is very… Irish. 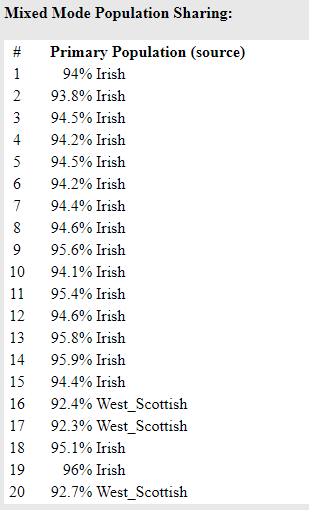