Anyone own Nukes or f-15s here?

Seems your President mocks you thinking you need to keep your guns to protect yourselves or overthrow the Government.

America has made it happen around the World for decades, why are American citizens not capable?

President Joe Biden’s new gun control crusade challenged the US founding fathers as well as the Democrats’ own January 6 “insurrection” narrative, by arguing armed citizenry would have no hope against an oppressive government.

“Those who say the blood of patriots y’know and all the stuff about how we’re going to have to move against the government. Well the tree of liberty is not watered with the blood of patriots,” Biden said on Wednesday, announcing new gun control actions from the White House. “What’s happened is, that there never been, if you wanted, you think you need to have weapons to take on the government, you need F-15s and maybe some nuclear weapons,” he continued. 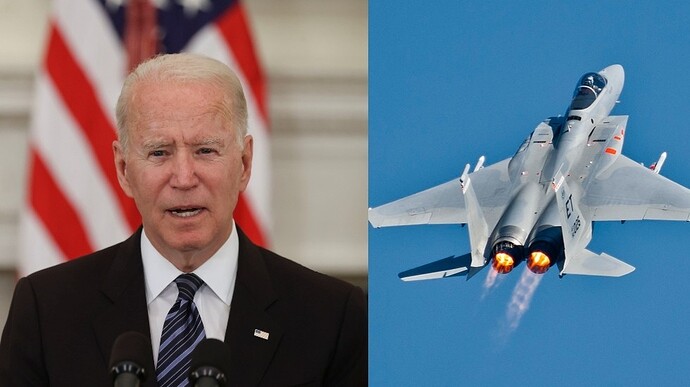 President Joe Biden’s new gun control crusade challenged the US founding fathers as well as the Democrats’ own January 6 “insurrection” narrative, by arguing armed citizenry would have no hope against an oppressive government.

If the government wasn’t worried, they wouldn’t be so vocal about white dudes with guns.

It was past his bedtime. Looked like he didn’t get his nap in today.

Once you start using bombers or nuclear weapons against your own people… The government has already lost.

Re how rifles can defeat the above… See Afghanistan. When employed by people who can’t read. 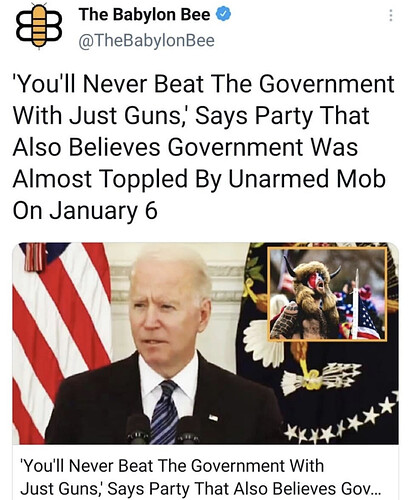 Does a microwave count?

I don’t think the average American with his shotgun can fight the government with its gunships and drones either. Makes sense.

Biden thinks the soldiers will choose him and the Cabal over their family and friends, or is he just a pretty good fighter pilot?

Well now that he is president we are losing ground in Iraq and Afghanistan. So what does that say. Biden and the people he choose to lead the military are not able to fight somewhere we have been fighting at for almost 2 decades. Trump gained massive amounts of ground that is already lost under biden.

Just imagine him trying to command the American military to kill their fellow Americans.

Yeah, face-palm worth drivel. I think you missed the point of that story (.the constitution) there Joe.
And Vietnam and Afghanistan would beg to differ.
And, as long as we DON’T have nukes or F-15’s, shouldn’t be a problem, right?
Mumbling old Alzheimer’s patient.

Not one average American but a whole shitload can. There’s not enough military or police to defend the govt and even if there was - no veteran or active duty service member will fight against and kill Americans.

I agree with you, by and large.

The problem that keeps me up at night though are things like The 29 Palms Survey.

I don’t have a lot experience with the survey, I looked it over but didn’t fill it out. I’ve seen criticism of it though on service member forums such as Rallypoint and they seem to think it’s not a well thought out survey in that it doesn’t offer enough neutral stances. Kind of forces you into a response. The other thing they talked about was that what American military person would ever pledge allegiance to a global force not named “American” in some way. The thinking is that patriots are not going to fight for anyone else but us. I tend to agree - given a choice, I’m not fighting for the UN or anyone else so that’s kind of the general consensus. As a veteran though, I can tell you that pretty much everyone I ever worked with or talked to said they would never fire on Americans. We would be immediately ousted from the country we love. On top of that, we don’t want to kill our families, friends, and neighbors. I mean, there’s some neighbors I would gladly take out but that’s another story. There would be a few of course that would fire on countrymen, but the consensus there is that we would take care of those guys ourselves. It’s hard to say what would actually happen, but I strongly doubt any good amount of soldiers would side with the govt given our oath is to the Constitution and not the govt.

I don’t think the average American with his shotgun can fight the government with its gunships and drones either. Makes sense.

Ask veterans if average people with IEDs and guns are a threat.

Then ask if ex police, military, and millions of extremely competent hobbyists with state of the art guns and who know their area are a threat.

Lost to people with very little training and organization.

Without nukes the US government has ZERO chance.

They are literally out gunned everywhere but nukes.

Re how rifles can defeat the above… See Afghanistan. When employed by people who can’t read.

Or how military armored vehicles stood up to molotovs just a few years ago in Ukraine, against a totally disarmed population.

Shitholers with AKs would argue otherwise. I think country boys can do a hell of a lot better than them.

That’s another area overlooked as well - Americans really know the areas in which they live. Some much much better than others. Think back to the days of the bootleggers. Those dudes were successful for a lot of reasons. They knew each other and they knew their land. Now throw in a whole shitload of veterans that are combat hardened and have been to war very recently and are trained in the newest weapons. How many of those guys own weapons now? You may or may not be surprised to know that most of the veterans, myself included, have close to or at least a dozen guns in their possession. Some much much more. In all honestly, with how tight a lot of us keep in touch with our friends that are still active - it wouldn’t take much to overrun a base or post and take those weapons as well. And a lot of the guys on the inside would be on our side. This fight is nowhere near as one sided as old creepy Joe thinks.

That’s why the military is pushing CRT and trying to fill their ranks with trannies. If the generals tell them the are fighting Republicans they will happily mow down everyone in their path.