Askren: Sadulaev is the Greatest Wrestler of all Time 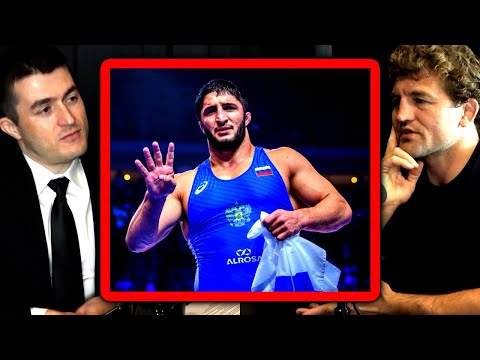 Earlier in the conversation he also said Saitiev was.

In Freestyle I would say Sadulaev has a chance to be the best ever. I’d put Medved and Saitiev ahead of him. But as far as overall, it’s Karelin. Dominant from the start with a hiccup at the end. Nobody in any style of wrestling will put up that kind of career ever. Sadulaev may come close but a lot can happen in the next 7 years.

Karelin is the MJ of wraslin

What about the greatest combat sports athlete of all time, Tripple C, Henry Cejudo.

I thought you got a job that kept you busy instead of trolling?

I thought you got a job that kept you busy instead of trolling?

So take some time off and focus on the right things. No more trolling, please.

Karelin is the MJ of wraslin

*Karelin was the Lance Armstrong of wrestling

Far as I or anyone else knows he never failed a drug test anywhere. It’s been 20+ years since he set foot on the mat as an athlete and a fair number of other wrestlers from that era had their backup sample tested and it came back. Taymazov lost his Olympic gold. I think Mussubles lost a medal too. In Taymazov’s case if you look at before and after pics he was juiced to the gills.

Crazy as it sounds, from interviews I’ve listened to, in a lot of other countries Greco pulls the top athletes and is the more popular style of wrestling. Referring specifically to Karelin, he is competing against a limited competitor pool, as the average dude is not 285, so I tend to lean more towards Saitiev being ahead in the rankings. There are the outliners but super heavy weight wrestlers tend not to be the most dynamic/entertaining displays of technique. In an interview, Matt Ghaffari said in all countries except US, if you aren’t the cream of the crop in Greco, you go to freestyle. He also said Karelin would smash anyone freestyle/greco at any level.

Earlier in the conversation he also said Saitiev was

He said Saitiev was the best on Tuesdays

I’m speaking from dominating all competition, for years he was untouched. Strong as a motherfucker too