NEW YORK CITY – Police in New York City are looking for a man behind a brutal attack at a Brooklyn subway station, and they’re hoping surveillance video of the horrific incident will lead to an arrest.

It happened around 7:15 p.m. on September 9 at the Atlantic Avenue-Barclays Center station in Boerum Hill, and the video shows the man kicking the woman in the chest after he walked past her on the stairs.

The 32-year-old victim, who didn’t want her name used, said the man pushed his way past her as they rode up the escalator to the street, and she told him he should have said, “Excuse me.” 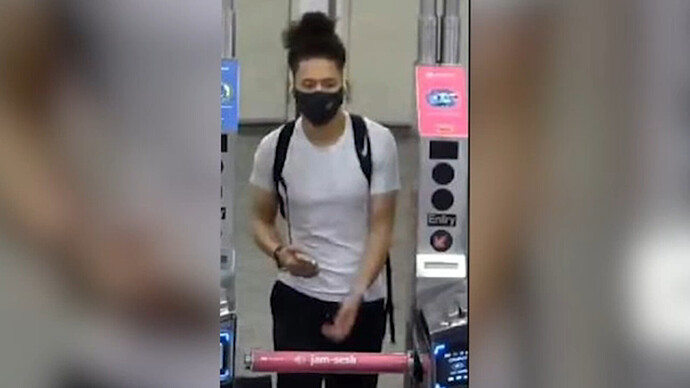 "He just kicked me out of nowhere": Shocking video shows a woman being kicked down a New York City subway escalator. A suspect is still being sought.

off with his head jaja…

“He just kicked me out of nowhere”

she told him he should have said, “Excuse me.”

Im sure it was that polite too from the chick. I mean Im not supporting kicking a cunt down an escalator and Im sure she was pissed but what kind of man would I be if I didnt instantly think the worst about a woman?

I’m going to side with the woman and assume the kick was an over reaction to words.

She was literally hunting him!

Black people are absolute savages in these situations. It’s like their primal DNA kicks in and they will just kill 10 people viscously without batting an eye. Then go onto everyday life shortly after.

Guy should definitely be punished harshly and I’m glad she wasn’t seriously hurt.

That said, hopefully this broad takes away the most important lesson she can: Shut the fuck up. You don’t know this person, he’s obviously a bit of a rude dick, and you’re flapping your gums at him? Well, turns out you picked a psycho. Most men won’t go that route but a small percentage doesn’t discriminate. Be glad you only got a front kick out of that deal.

He should be punished harshly. If she wants to live around courteous or even semi polite people she needs to get out of NYC.