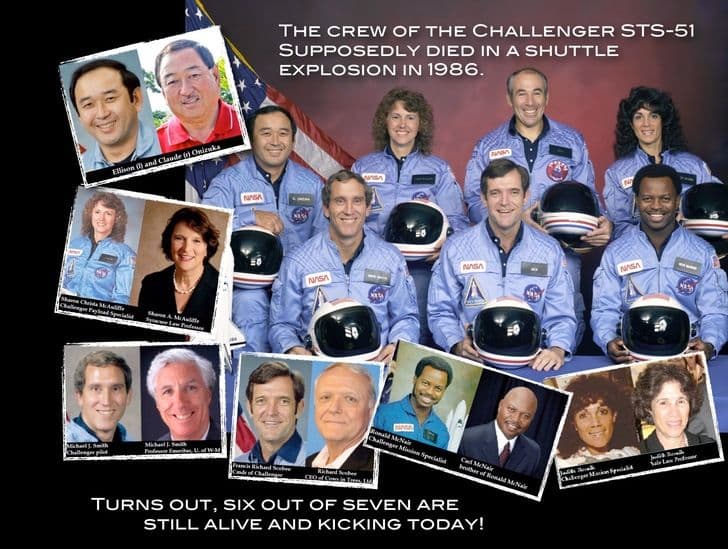 google image search has been around since 2001

i could work one of those up for pretty easy

This has been floated around for years!

I’m not falling for that one

Questions for those with more knowledge of this kind of thing.

Is there a reason a crew cabin wouldn’t be fitted with an emergency parachute? It feels like a reasonably easy thing to implement? And if so do shuttles now have them, if this exact scenario happened again, would they be able to make it?

One of my earliest memories is watching the launch live on TV. Deeply affected a lot of kids I think, space was meant to be amazing and where all boys dreamt of going, this moment changed all those dreams. RIP to them

i think i was in the third grade. i distinctly remember my dad being bothered by all the focus on the teacher, lol

his take was fuck this bullshit babysitter, what about all the top-level scientists, engineers, and aviators we lost that might have actually made a difference in the world? i’m laughing thinking about it right now

This “theory” was debunked long ago and is typical ctard nonsense

We were watching this live in class when it happened. The school sent us all home for the rest of the day

The launch was a huge PR push for NASA and was viewed live by schoolkids across America.

Punky Brewster even had an Extra Afterschool Special on it.

NASA also said we walked on the moon… lol

Don’t believe a word of it.

do shuttles now have them, if this exact scenario happened again, would they be able to make it?

Is there a reason a crew cabin wouldn’t be fitted with an emergency parachute? It feels like a reasonably easy thing to implement?

The crew cabin was not detachable, it was an integral part of the shuttle.

The viability of a space launch vehicle is dependent on the payload it can deliver into orbit. Any emergency escape system would add complexity and weight to the design, reducing it’s viability accordingly.

The space shuttle did have ejector seats fitted during the testing phase, but that was only for the two test pilots. Ejector seats were not considered to be feasible in the final design for two reasons.

Firstly each ejector seat requires a hatch from which to launch the astronaut , and putting seven hatches into the design would weaken the structure significantly, meaning the shuttle would have to have a load more structure built in and be a lot heavier.

Secondly ejector seats can only be used at relatively low speeds. I remember seeing an interview with a jet fighter pilot who ejected from his aircraft at supersonic speeds, to tell the story in his words: “It felt like somebody had just hit me with a train,” said Udell. “When I went out into the wind stream, it ripped my helmet right off my head, broke all the blood vessels in my head and face, my head was swollen the size of a basketball and my lips were the size of cucumbers. My left elbow was dislocated and pointed backward, the only thing holding my leg on was an artery, the vein, the nerve and the skin and my left leg snapped at the bottom half.” Now ejector seats could be designed for much greater protection, apparently the limit is around mach 3 for survival. This is an issue, as the shuttle reaches mach 18 during the launch phase.

After the Challenger disaster, a system was introduced that would allow the crew to open a hatch and bail out using parachutes. Had that been in place on Challenger, it’s questionable how feasible it would be for them to do that whilst in freefall in a crew compartment that was probably spinning wildly out of control. My guess is that it’s unlikely any of them would have made it, but there would have been a chance at least.

Yeah, the shuttle during launch moves so fast an ejector seat would likely be instant death anyway

The hype around the Teacher in Space thing was huge, and it was a sign that everyone thought space flight was so routine and so safe even a regular person could do it. The Shuttle was a space race triumph in the still running Cold War.

That the shuttle blew up while every kid in America watched the launch was a PR nightmare…that she most likely died screaming in a three min free fall was something they felt they needed to hide.

Not really hard to figure out, honestly. Same reason you tell a white lie to your kids about someone that died or got sick and what they may have went through in their final moments.
“well little johnny, grandma’s cancer caused her to spend the last few hours of her life in agony and crippling pain”
No need for undue trauma

He was ahead of his time lol

If this was even remotely true. Why hide it/them from the public?

They didn’t hide it. NASA released a report. It’s in the vid in the OP.