UFC on FOX: What fights should be featured on the inaugural card? 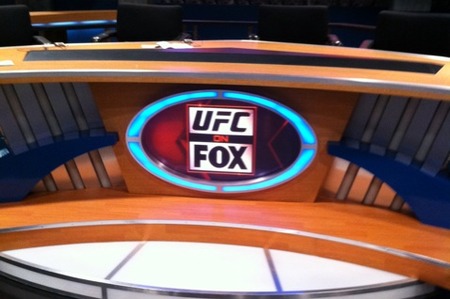 It was announced this week that Ultimate Fighting Championship (UFC) has reached a deal with FOX to broadcast its events on network TV. Also announced was the UFC's intention to hold its first FOX event on Nov. 12 (2011) in Anaheim, California.

So far, no announcement has been made regarding the actual makeup of the fight card, but it has been confirmed that it will be one hour in length (assuming no run over) and will feature two fights.

Initially, there were rumors abounding that the card may feature heavyweight monster Brock Lesnar in his triumphant return, but it turned out that was more wishful thinking than anything.

It's fun to speculate, after all. Everyone loves a good rumor and some juicy gossip.

If you want eyeballs, you need names. You also need to appeal to the masses. The truth is that the "average Joe" sports fan isn't going to get Brazilian jiu-jitsu (BJJ) right away. A technical ground match will probably not keep the mainstream tuning in.

People want to see fireworks. They want to see explosions. More than likely, the UFC will want to bring in the "big guns."

A heavyweight match-up makes the most sense. But who would even be available?

Champion Cain Velasquez and number one contender Junior dos Santos already have a date for their dance. Roy Nelson and Mirko Filipovic also have plans. Brock Lesnar simply won't be ready that soon. Cheick Kongo and Matt Mitrione have a prior engagement with each other. Antonio Rodrigo Nogueira and Brendan Schaub will be out of commission for a while, due to their upcoming fight this Saturday night (Aug. 27) at UFC 134 in Rio de Janeiro, Brazil. Stefan Struve and Pat Barry are fighting each other on Oct. 1.

You get the picture. So who's left?

Frank Mir is currently without an opponent. Love him or hate him (and generally, it's one or the other), Mir is good at selling pay-per-views (PPV). He talks a good game. Sometimes, he even backs it up.

I'd love to see him fight Alistair Overeem. I understand it's a fantasy match at this point. "The Reem" has not been signed yet by the UFC, but based on all the recent talk, it does feel like it's going to happen sooner rather than later. It would be a great opportunity for Overeem to show what he's made of ... for better or worse.

If he were to beat Mir, and look good doing it, he'd deserve a top guy and a little more respect than he's been getting as of late. If he loses, quite frankly, he'll probably get tossed in the pile of rubble currently occupied by Fedor Emelianenko. Fans want to see Overeem fighting the best of the best and they want to see it now. It would be a good match-up. If it's free, it's a win-win.

So what about the other fight on the card? As previously noted, the big boys are busy. The lightweight division is arguably the UFC's most exciting division right now.

Obviously, current champion Frankie Edgar and number one contender Gray Maynard are out of the picture for a while. Melvin Guillard will have his hands full with Joe Lauzon on Oct. 8 at UFC 136, and will certainly not be available for a November match-up.

It might not be possible due to the timing of things, but I'll tell you what I'd love to see as the other fight on the card: Clay Guida vs. Ben Henderson.

How could that not be a fun fight? The only issue would be if the cameras could keep up with them and the amount of flying hair.

It would be a number one contender match to see who gets the winner of the Edgar-Maynard fight. It makes a ton of sense, it's really just a matter of if Henderson can be ready that soon, having only just fought a week ago on Sunday, Aug. 14, 2011. It's doable. I'd love to see it.

fitch vs story as well. guida and fitch as the 2 fights on FOX would bring in the most ratings.

belfort vs leben is a great idea..i was thinking having Uriah Faber on there to, can't think of against who though.

move Stann vs. Sonnen to the card.


fitch vs story as well. guida and fitch as the 2 fights on FOX would bring in the most ratings.

lol..i can sense the sarcasm.  i see the parallel u are trying to draw between the two, but no way bendo gets blanketed by guida

Cain vs. JDS would be huge

Bendo V Guida needs to be a 5 rounder when it happens. Is that possible on this 1 hours show?

Mookie Blaylock - Cain vs. JDS would be huge

yup, too bad uriah faber is getting down ufc 139 as well

Pettis vs. Cowboy would be awesome.

Not sure of the time table on Sonnen/Stann but I like that idea. And whoever thought of Pettis/Cerrone bravo.

I want to see Poirier fight but he is destined to stay on the Undercard that night.

J-Tee -  belfort vs leben is a great idea..i was thinking having Uriah Faber on there to, can't think of against who though.

the phenom vs. the crippler

I would like to see Ortiz vs Hendo/Chuck and Pettis vs Stout.

J-Tee -  belfort vs leben is a great idea..i was thinking having Uriah Faber on there to, can't think of against who though.

been wanting to see that matchup for years..but unfortunately Uriah is fighting Bowles at ufc 139 on nov. 19th

bad1121 -  I agree Pettis vs cowboy would be epic but not enough name value to casual viewer. It has to be a name people know. Chuck, lesnar, Ortiz, Anderson, ect. I think out of the gate they have to go with name value and excitability to bring the casual viewer.

Chuck out of retirement for chuck vs Tito. Hardcore fans wouldn't like it but casual fans would. And it would be exciting.

i see ur point but i disagree. I think what the UFC is really interested in during this first outing is attracting brand new fans, a fresh set of eyes to the sport.  and for that, they will need exciting matchups.  pettis vs. cerrone will definitely do it and vitor vs. leben would be way more than enough to not only satisfy the casual fans, but it will be exciting as well.

the phenom vs. the crippler