How in the name of everything holy did this guy fall so far in the draft. This kid is a flat out star. You know Okie State as good or better than anyone, what is this kids deal? He is going to be a great pro for a long time.

I know man I'm pretty sure I told you that right after they drafted him when you considered him an afterthought! I really haven't had a chance to follow him in the preseason but if he isn't returning punts and/or kickoffs he will be soon!!! Dude is a flat out beast. I remember being at his first ever game when the first time he touched the ball in college he took it to the house for a TD as a true freshman. I was like man, no fucking way this guy is gonna stay here for 4 years! He fell in the draft because he is immature and made some bad decisions and actually got sent home the day before the Cotton Bowl game because the fucking idiot missed curfew MULTIPLE times that week. Before a couple of his screwups, he was being projected as a first round pick. In a bunch of mock drafts it had him going #28 to the JETS but they took Kyle Wilson instead because of Cox's troubles (Kyle Wilson looks like he is gonna be a bonafide star as well!)


Perrish should be able to jump right in where Darrent Williams left off RIP :( :(


It's kinda funny how the Broncos have had a nice little pipleline with drafting Oklahoma State players over the years (darrent williams, tatum bell, perrish cox and I think there were a couple more) Is Ryan McBean still on the team? He is another one 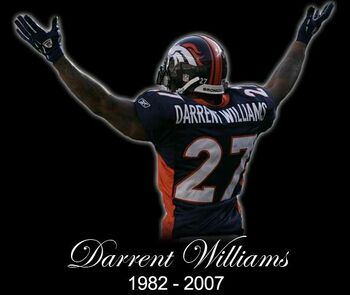 McBean is not only on the team, but is starting, and is a very big part of the defense. He beat out Jarvis Green (whom they brought in from NE to start) and is our starting 5 technique. He is a very big guy as well. Very glad he made it with us.