B-ball team kicked out of league b/c of jerseys 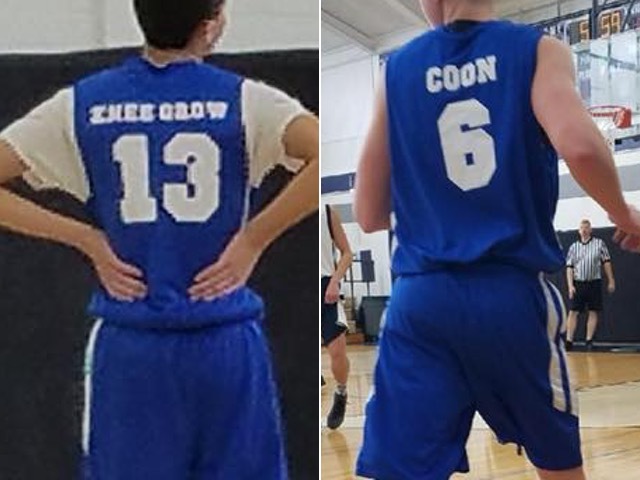 A boys basketball team has been kicked out of a Cincinnati-area recreational hoops league for wearing uniforms bearing a sexually suggestive team name on the front and racially objectionable names on the back.

Four weeks into the Cincinnati Premier Youth Basketball League’s season, parents of players on a team from West Clermont, Ohio, saw that the team from Kings Mills, Ohio, against whom their children were playing was named “The Wet Dream Team.” They also noticed that the names on the backs of the high-school-aged boys’ jerseys included phrases like “Knee Grow” and “Coon.”

Tony Rue, a parent of a West Clermont player, highlighted the eyebrow-raising jerseys in a lengthy Facebook post asking how such attire, and such a team name, was deemed appropriate for a league that hosts players from grades two through 12.

“By no means are we perfect parents or assume our teenage boys are innocent and don’t speak of things like this, but I could never imagine allowing my teenage son to represent his school and league in this manner, let alone representing our family with such filth,” Rue wrote. “[…] There is enough hate, bullying, and aggressive behavior in the world that these kids, parents, and schools shouldn’t have to deal with bigotry and lewd innuendos on jerseys and in team names in a school district represented recreational basketball league. This isn’t a typo, this isn’t a mistake, these are ideas that were thought of, discussed, agreed upon by adults and kids alike, printed on uniforms, social media accounts registered and manned and no one thought this was a bad idea or inappropriate?”

They’ve also been “restricted from any further use of district facilities,” according to a spokesperson for the Kings Local School District, who emphasized that this team of students and the league in which they were playing isn’t affiliated with the district itself.

“Kings Local Schools strongly condemns any type of hateful and racist commentary,” wrote spokesperson Dawn Gould. “This behavior is in no way welcome or tolerated in our schools and community.”

The team’s coach, Walt Gill, apologized “to anyone that was offended by the jerseys” in a statement to WLWT. He noted that the team “offered to cover them up or change,” but that the league still chose to eject the team, “and we have accepted that decision.”

The incident has drawn the attention of the Cincinnati chapter of the NAACP, which wants to have a chat with the people in charge of the rec league.

“This is a teachable moment for [the teen players] to understand how these words are hurtful,” Cincinnati NAACP first vice president Joe Mallory told Cincinnati Fox affiliate WXIX-TV. “They’re inflammatory, and they’re divisive to the entire community. […] It’s everybody’s problem. It’s everybody’s business that when these things happen we all stand up and speak out on it.”

"It was so blatant that it had to be fake," Rue later told Chris Mayhew of the Cincinnati Enquirer. "Sadly it wasn't."

So Rue raised a flag with a rep for the youth league, wondering how this team was being allowed to play with stuff like this written on its uniforms.

"I think he called people above him, and about midway through the second quarter, he came and got the refs' attention and told him the game was over," Rue told Karin Johnson of Cincinnati NBC affiliate WLWT-TV. "It was called. We weren't going to be a part of it."

And now, the "Wet Dream Team" won't be, either.

"CPYBL was developed to provide the best possible basketball experience for the youth of our communities and their families and has always been committed to bringing a positive experience to all of our members," wrote Cincinnati Premier Youth Basketball League spokesman Ben Goodyear in a statement to the Enquirer. "Based on the information that we received, the actions and conduct of the team in question did not comply with our stated mission and expected standards and that team has, therefore, been dismissed from our league."

What did they think was gonna happen???

I can see kids being stupid like that but it's clear several adults had to be on board.

some adult must have thought this was a lark. even the name of the team, should have halted all this.

Sounds like a good way to get the shit kicked out of you.

incredible that such a shitty idea made it to fruition. like thats not somethign yo udo on a whim. that shit took time and planning. really are some retards out there...

Retards. Need to get their ass kicked just so they're aware they can't get away with whatever they want.

You're assuming they're conservative? The OG tells me it's liberals who are racist.

I assumed nothing, other than that they are not the far left, which I think is a pretty fair assumption.

Its not just liberals that can be racist, they are just the best at it.

My brother's indoor soccer team was the Blue Ballers or some shit. That was kind of ok I guess.

I'm assuming there were no coaches.

Agreed.  I am actually OK with "The Wet Dream Team".  Coon and knee grow are unacceptable.

Those Jerseys are funny.

You all sound like a bunch of old retarded women.

I can see the kids submitting the application as a joke, but there has to also be some level of responsibility on the league for accepting it. You can't just say the kids are the only one responsible

Not in a youth league where there were also elementary school kids and their siblings watching.

An adult rec league and I wouldn't trip. Even though some players might bring out their families and it could be an issue.