Does anyone else use this? I use this so much that when I know my opponent is going to mount I’ll put one arm under their mount in preparation for this mount escape. I’ll hit this escape from being on bottom of full mount, I’ll even bridge to get my arm under the leg. I’ve never been taught this formally that I can remember but have been told not to do it because I’ll end up in a triangle. I can say after doing this hundreds (thousands?) of times, that this doesn’t happen. I don’t think I’ve ever been triangled one using this mount escape. It works damn good pretty much every time.

Does anyone else use or teach this? Thoughts on this escape? (And I know this isn’t the traditional back door escape but not sure what else to call it) 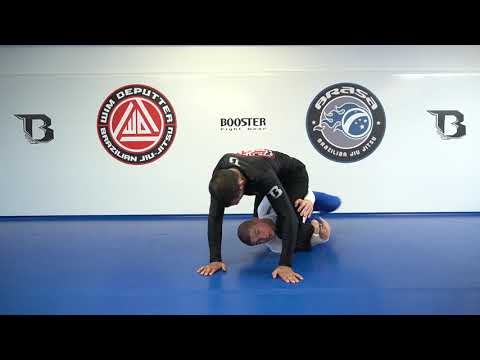 Great technique, I first saw it at a Erik Paulson seminar, mid 90’s ?.

if you can hook an ankle or sometimes even knee with your deep underhook, there are a few pretty good reversal options

Works great. The guys that know I do it tend to get good at flowing to sidemount when he hand goes under. But guys that don’t know I do it usually go for triangles which of course are very hard to get as u see it coming and u can just keep your bottom elbow tight to your torso

Cool to hear that others use it. As I said before, I was never formally taught this move (that I can remember) but sorta found it on my own. I like deep half. I also like the simple side control escape of getting the underhook and turning out, pretty much the exact same motion as this mount escape only from side control and instead of hooking under the leg, you hook under the arm. Then, I started using the back door escape from S-mount and that led to me using it for normal mount. So, the motion is one I use in other areas, like deep half or side control, so it sorta came naturally and I have a really, really good success rate with it.

I use this escape a few ways. One is just like the video. They step up, I put my arm in the space, and go. I really like it coming out of a scramble when you know your opponent is going to take mount. At the last second, right before they mount I throw my arm under. Often they try to go to S-mount at which point I just go with the escape. Sometimes I will even hip up and slip my arm under their leg and just use this position to rest. Let them work on some arm attack or let them start setting up something, anything really (except the triangle, if they are setting that up, go immediately), but I will get my arm under and take a breather while they work and when I am ready, explode out and they just went from “I was 99% sure I was going to get an Americana” to “this guy is on my back now” in an instant.

Anyway, the point of this thread was that I was never shown this so I didn’t know if I was breaking some rule or doing bad jiu-jitsu. I have been told by at least one instructor not to do this escape but I have to disagree. It works great and I honestly cannot say if I have ever been caught in a triangle, or any sub, when using this escape. It makes me wonder why it isn’t taught more. Do any of you teach it or have you been taught it? Maybe its just my school?

Similar concept but I go to deep half first. Then I can score vs it being a reversal.

I think it’s great. Not to split hairs, but, to me, this is more a “Triple Attack/Side Mount Escape”. In the video he is forcing the guy on top to go to Triple Attack Side Mount" (one knee down, one knee up) before escaping.

I teach that as the primary escape from the Triple Attack/Side Mount position. (I have a video teaching it somewhere on Youtube). Only thing I do slightly different is I emphasize to “SLAP” the mat with my palm so that I have a base to push off of to duck out/back out the back door if they are going for a Triangle or clamping their legs. Also, slapping the mat adds some forward impetus to throw your opponent off you and helps avoid such entanglements. I DON’T want them to stick to me.

This escape is similar to the very the old school Mount Escape where you shoot one arm inside and clasp you hands around your opponent’s thigh & upa to escape. (Probably that is what you are calling the ‘Back Door Escape’?) That is done with your opponent in a true Mount with both his knees on the ground. That one can work too, but is a lot “tighter” and I think easier to counter. I prefer this one in the video.

See, the full mount version you describe, I use that, a lot. I’ll slip my arm under their leg. Guys will take the bait and go high mount and work toward S mount and I just slip out the back door. It’s one of those moves I hit so much and with such high success rate that I try not to do it so I can learn other stuff.

Also, s mount is almost a non issue for me because this same escape works so well for it. I will rest on the bottom of s mount and explode out when I’m ready. Really the only difference is a higher chance of getting triangled but in that case just pay attention before you go. If they are setting up a triangle from s mount this escape can play into them. In all other cases, it works like a charm.

Yep use it often Great escape technique, I use it often.

I use this as well, works most of the time. It’s kind of a Hail Mary move IMO, I’ll usually try it with nothing to lose since being mounted is close to the worst, if not the worst, position to be in for Jiu Jitsu.

I feel like mount is the most overrated position in BJJ. Don’t get me wrong, it is not a great place to be, but when I have top mount, I don’t like my attacks as much as other positions, like side control, and if I am on bottom mount I honestly rarely ever feel threatened and generally speaking, when guy on top mount goes to attack it opens the door for me on bottom to escape most of the time. Again, its not great being on bottom mount but I don’t think top mount is as good as people say it is.

My two cents, I am sure others will disagree, but I see bottom mount as more of a rest position than one in which I feel I am in imminent danger.

I think it really depends WHO is mounting you.

A lot of people play a movement oriented game rather than a pressure based style, and that gives you more opportunity to use these back-door type escapes.

Also, since mount is the first position we typically learn to escape, I’ve seen a lot of people just shy away from developing a good and effective full mount, figuring (early in their development) it’s not going to work anyway. They tend to be more comfortable transitioning to Technical side mount and S-mount, maybe trying to get to the back, or just staying in some form of side control and avoid taking mount altogether.

As someone who plays a heavy pressure based mount myself (as do my teachers), and who also often uses these very escapes you’re posting about when I’m on bottom, I’ll rarely give an opportunity for these escapes to work against me. But I’m a brown belt who, unlike many, prefers and specializes in the mount position.