Need a blue to embed, thanx.

Former heavyweight champion of the UFC lightweights is almost finalized by the woman, who asked her to marry inside the Octagon after a victory in 2013.

Benson Henderson was already headlining the open workout of "UFC: Henderson x Of Angels", on Thursday, so you can not say he "stole the show" for the activity to appear with his wife, Maria. However, the couple surprised the audience by appearing kimono and star in a "roll" of jiu-jitsu mats assembled in the hotel that houses the organization's Ultimate this weekend. (See the next video).

Former champion lightweights wear a black kimono, and his wife, blue kimono. The exhibition had many moments of great technique and, in the end, Maria almost took the arm of Benson, identical to a fighter who cost the belt of lightweights, last year in the fight against Anthony Pettis position. Highly competitive, "Smooth" toyed with the situation at the end of the open workout.

- It was really cool, something I always wanted to do something new ... I do not like the way over (laughs), but for me it was something fun to roll with my wife. She hit me a little (laughs). I'm kinda tired, was the lack of calories,'s two days before weighing. I can use that excuse! - Laughed.

The "almost" finish was no mere joke or help from "hubby". Maria was placed third at the World Jiu-Jitsu Kimono in 2013, and was defeated by the eventual champion in the semifinals by finishing missing two seconds to go - she had advantage on points. After the World Cup, received his black belt from his master. According to Benson, who proposed to her inside the Octagon after his win over Gilbert Melendez in April last year, his wife is fanatical by the "gentle art" and is always looking to evolve.

- It's great to have someone to perfect techniques, but she does more than that to me. Two in the morning, she's watching online videos (and says), "Look, I thought this position, we will try!" And I say, "Gata ... It's good, we'll try." And that is why it is also so good - told.

I tried, I failed.

Loved the translated version. All the UG news should be google translated.

I love to make "rolls" of jiu jitsu, great with wasabi and soy sauce! 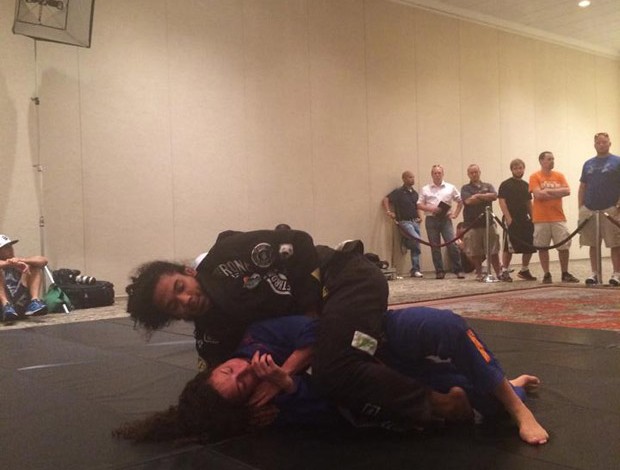 Lost my shit at that part.

Lost my shit at that part.