First and foremost, an official synopsis and the first images have been released.

"The series is set six years before Saul Goodman meets Walter White. When we meet him, the man who will become Saul Goodman is known as Jimmy McGill, a small-time lawyer searching for his destiny, and, more immediately, hustling to make ends meet. Working alongside, and, often, against Jimmy, is "fixer" Mike Ehrmantraut, a beloved character introduced in Breaking Bad. The series will track Jimmy's transformation into Saul Goodman, the man who puts "criminal" in "Criminal lawyer." The series' tone is dramatic, wove with dark humor." 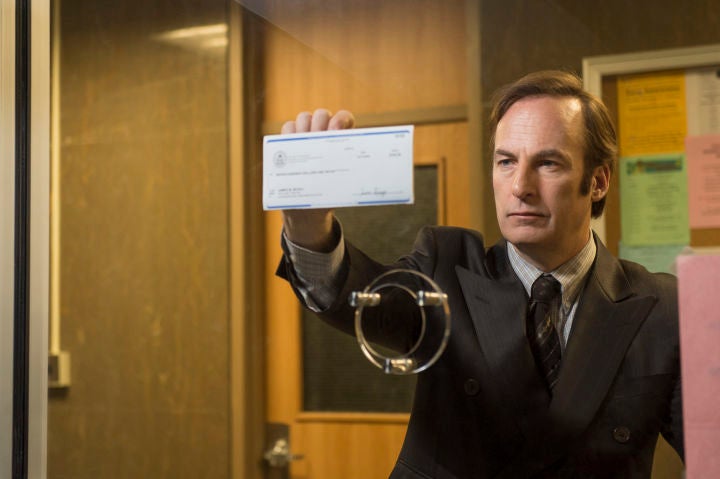 The synopsis answers a few questions and opens the door to several more. The timeline for the series has been a frequent topic of discussion, with Saul Goodman himself, Bob Odenkirk, telling IGN that Better Call Saul may be a prequel/sequel hybrid as early as November of last year. Reports then emerged that the show might indeed follow three timelines: one in the past, one during the period in which Breaking Bad took place, and one post-Breaking Bad.

The official synopsis makes it sound as through the Saul will be located entirely in the past, though. When asked for clarification, Gilligan said evasively, "Without getting in trouble or giving anything away...You saw that we like non-linear storytelling on Breaking Bad. Anything that was possible on Breaking Bad is possible on Better Call Saul."

According to Gould, the series will essentially explore the question: "What problem does being Saul Goodman solve?" In other words, it will trace the circumstances that caused Jimmy McGill to adopt the Goodman persona.

Saul was initially - and often - a comedic character on Breaking Bad, so many had wondered if the spinoff would be more comedy than drama. Gilligan explained that they explored every possibility for the show, one of which was more of a "procedural" comedy of sorts in which Goodman would deal with a new client/problem to solve each week.

Eventually, they landed on an approach that Gould says will mirror the "tradition of Breaking Bad" in that they will present a series that has been sweated over, that has a tremendous attention to detail, and some showmanship.

"Saul moved the Breaking Bad universe two degrees to the left," Gould, who created the character, explained. "At first I was worried that he wouldn't quite fit, but low and behold this puzzle piece of Saul Goodman fit and made the drama more dramatic and the comedy more comedyesque. Initially, he was introduced to solve a story problem, but it was so much fun to write a character who was a slippery and loquacious. As the series went on, Walter got deeper and heavier, so we had another character skidding over the top of the waves and that seemed to work."

In addition to Odenkirk, the network confirmed the line-up of series regulars for Saul. Joining Odenkirk are Jonathan Banks (Breaking Bad, Wiseguy) as “fixer” Mike Erhmantraut, Michael McKean (This is Spinal Tap) as Chuck, Rhea Seehorn (Franklin & Bash, House of Lies) as Kim, Patrick Fabian (Big Love, Grey’s Anatomy) as Hamlin and Michael Mando (Orphan Black, The Killing) as Nacho – characters that will represent both legitimate and illegitimate sides of the law.

Mckean plays Goodman's - or in this world McGill's - brother, Chuck and the relationship seems to be at the center of the series. "To have these two comedy legends working together is amazing," Gilligan said. Adding, "And Michael will answer questions about Spinal Tap!" 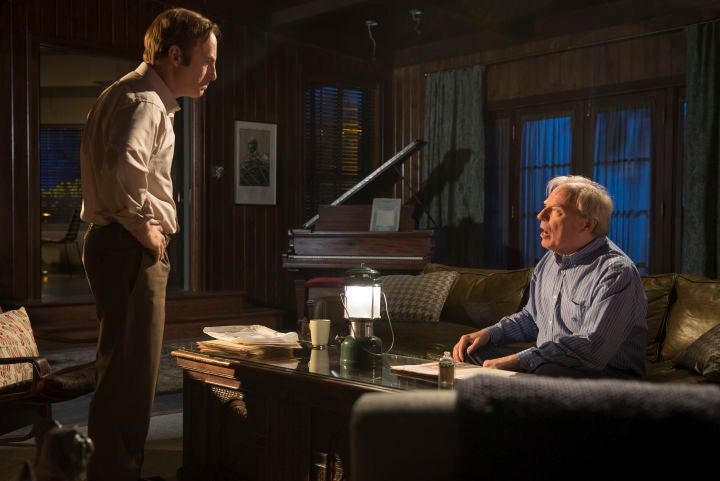 Fan favorite Erhmantraut will be there, as mentioned, but as the press reminded both Gilligan and Gould, it feels possible that we might see any number of additional Breaking Bad characters show up. There's certainly been a lot of chatter to that effect.

"Sure, these are all characters we love and there's always that possibility, Gould reflected. "We want to make something that stands on its own, though. This is not the series equivalent of a clip show."

The big question is of course: Will Walter White make an appearance, or will he not?

In an interview with IGN, Bryan Cranston himself said that he didn't know "how it would work" to have White on Saul, but added that he would like to direct an episode of the series.

When we followed up with Gilligan and Gould after the panel, the producers would only say that they'd love to have Cranston involved in any capacity on the show. "First and foremost because he's a wonderful person," Gilligan said. "He's also a great director," Gould added. As to Walter on the show, Gilligan would only say, "Maybe there is a way to make it work..."

Certainly if a portion of the series does in fact take place during the same period as Breaking Bad, it is conceivable...

Breaking Bad is a beloved series, which means that Saul is coming out of the gate with a tremendous amount of scrutiny and anticipation, which isn't necessarily the norm for a fledgling show.

"I'm so proud of Breaking Bad, so this is like tightrope walking," Gould said. "If you look down you fall. We made this choice to follow this character because he intrigues us and we didn't feel like we were done with the world. It's daunting, but we have to go for it."

"It's a leap of faith or stupidity," Gilligan added. "It's a challenge, but we're having fun. We're breaking episode 8 out of 10 now. It's like solving a Rubik's Cube...Though having said that I've never solved a Rubik's Cube in my life..."

Essentially, we know where Saul's going to "end up", so part of the puzzle is keeping things engaging and at least to some degree unknown. "There are limitations," Gilligan conceded. "We can't have him lose an arm in episode one..."

"It reminds me of season 5 and the machine gun in the trunk," Gould reflected. "We knew that was the right image, but we had no idea how we were going to get there."

It created somewhat of a stir in the press when the series premiere  for Better Call Saul was pushed back.

"I take full responsibility for that," Gilligan said. "We could have made the deadline, but I am slow as mud as a TV writer. It was my worry when I joined The X-Files because I'd been a feature film writer. We had a pace on Breaking Bad that was deliciously stately and it was nothing that the network wanted, but we have a way of doing things that is slower than most TV shows and we think that pays dividends. When people said that Breaking Bad felt tightly woven, the largest factor for that being the case is that thanks to Sony we had the time to see things through. We could have made the premiere date [for Saul], but we didn't know that the story would work through Season 2 if we did that. We only know the one way to do it  and that's the reason Breaking Bad's final season was broken up into two. We didn't elongate artificially, it was just the time that we needed."

As previously announced, Gilligan directed the first episode of the series, which has already been greenlit for a second season of 13 episodes.  The debut season will consist of 10 episodes.

Roth Cornet is an Entertainment Editor for IGN. You can follow her on Twitter at @RothCornet and IGN at Roth-IGN.

Very excited for this.

Sounds like it has a little more depth than I initially assumed.

Does this mean that Bryan Cranston’s Walter and Aaron Paul’s Jesse Pinkman could show up in some capacity, as Cranston himself has hinted in the past? According to Gilligan, it’s not entirely out of the question:

“If it makes sense we’ll do it, if it doesn’t make sense we won’t. I’d love to have him as a director … character wise, who knows? Maybe there’s a way to do it.”

If more Walter White is possible, than what about Giancarlo Esposito’s unforgettable villain, Gus Fring? Given the prequel aspect of Better Call Saul, a look at Fring’s meth operation makes a certain amount of sense. When asked about the possible inclusion of Fring, Gilligan said, “There’s always a chance, yeah.”

But would that be something that would benefit the spinoff? Peter Gould elaborated on the subject, saying:

“These are all characters we love and with Gus there is so much more to say about that character, and we certainly love Giancarlo. Having said that, we’re trying to make something that stands on its own that has an entertainment value that’s not just seeing a series of old favorites. It’s not the series equivalent of a clip show. So we try to balance these things out. But I agree there’s so much to be said about Gus — although in the series it always seemed to me that Saul didn’t know Gus directly. He knew a guy who knew a guy.”

Keeping on the subject of Better Call Saul maintaining its own identity, Gilligan noted that Breaking Bad‘s distinctive visual style will not be replicated in the spinoff. According to Gilligan:

“Peter came with an idea book of frame grabs from classic movies, like ‘The Conformist,’ we talked a lot about Kubrick. We’re doing our damnedest to make it as different as possible. It’s important that this not look like a carbon copy of ‘Breaking Bad.’ ”

With all of this in mind, and despite already having been renewed for a second season, Better Call Saul saw its premiere date moved from late 2014 to early 2015. According to Gilligan, the reason for this is, “I am slow as mud as a TV writer.” He went on to say:

“We had a pace on ‘Breaking Bad’ thanks to AMC that was deliciously stately … we have a way of doing things that’s slower than most tv shows … because we want to think everything through and we think that pays dividends.”

Gilligan and Gould also confirmed the return of several veteran Breaking Bad directors. Gilligan himself directed the pilot episode, with Michelle MacLaren (known for her work on Game of Thrones) helming episode 2. The third episode will be directed by Terry McDonough (NBC’s Crossbones, as well as the introductory Saul episode of Breaking Bad), and the fourth and fifth by Colin Bucksey (Elementary) and Adam Bernstein (Californication).

Since fans of the Breaking Bad universe will have to wait at least six more months for Saul to take center stage, these new details will have to suffice, at least until a proper series trailer is unveiled.

What do you think, Screen Ranters? Are you looking forward to Better Call Saul? Sound off in the comments!

glad they have the actor playing mike returning... and seems very likely billy burr's character will be making cameos...

Tuco would be TIGHT.

Fabes - Tuco would be TIGHT.

Well, it's not going to be Breaking Bad good. I don't expect that.