When we’re the funding lines ending? Normally it’s with the fiscal year, but maybe this is different. When the funding line is coming to an end, government agencies spend everything they have left on items they’ll use. Everything from printer paper to bullets. They have to use every penny they can because they can’t ask for more money next year if they didn’t spend all their money this year 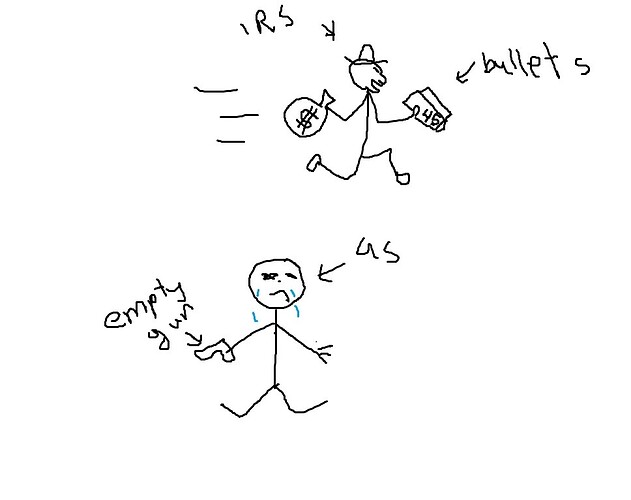 Before I explain it, let me say I’m going be calling them bullets even though they’re technically rounds. But everyone understands what is meant when I say bullets, so that’s what I’ll use…

Here’s an example with made up numbers.

Let’s say there are two companies bidding for the contract, and they both estimate that the cost to operate the facility for a year will cost $80k.

Company A submits a bid saying they’ll run the factory for $100k a year. They figure $80k will go to operations, and $20k will be their profits.

Company B submits a bid saying they’ll run the factory for $75k a year (technically less than what it will cost them to run it for a year). They do this not expecting to take a loss, but rather they see that if instead of making bullets for five 8-hour shifts (Mon-Fri), if they operate five 10-hour shifts, they can produce 25% more bullets than what the government requires in the contract, and they estimate that it’ll only cost them $10k more a year in operational costs. So technically they’re losing money on the contract, but they take the extra 25% they produce a year, and sell it on the non-government market making $40k a year. So now they’re making $115k a year ($75k from the government, and $40k from the non-governmental market), after taking out $90k for their expenses for the year, they’re profiting $25k a year, which is more than Company A expected to profit with their bid that was more expensive then Company B.

Yes, this is vast over simplification of it. But I’m not saying that’s exactly how it was done, I’m just using a made up example to help explain was I said in my previous reply

They are in no way the only manufacturer of 9mm or 5.56 ammo out there.

So long as there is demand then there will be supply. And as far as I know ammo manufacturers are running existing production lines all three shifts trying to keep up with demand.

The thing, though, is how much of the demand is people stocking up & hording for political reasons? If the demand is political, read that ARTIFICIAL, then that demand could vanish overnight. So none of the manufacturers are willing to do the capital investment in additional equipment so they can run more production lines.

For us end users, ammo is non-perishable. Buy it when it’s available, and stack the boxes in your closet, floor to ceiling