Good article on Jankowicz’s background, coming from a left-leaning political magazine. It’s always gratifying to see that some liberals still believe in unbiased journalism and are willing to call out bullshit from their own side, even when it contradicts the official narrative. 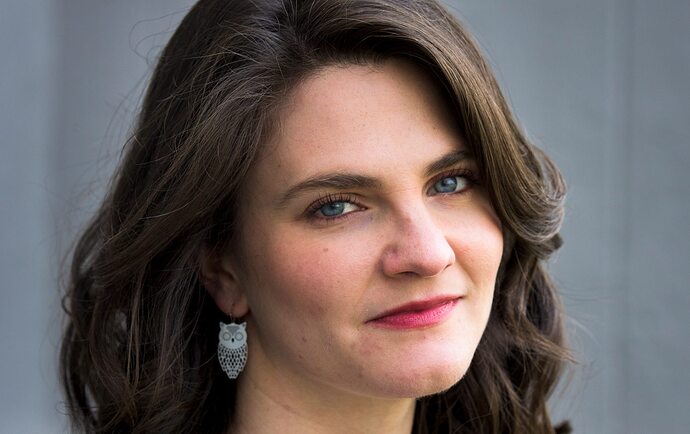 Meet the Head of Biden’s New “Disinformation Governing Board”

Nina Jankowicz is a veteran information warrior. But her “experience” working with StopFake should have set off alarm bells.

Late last month, the Joe Biden administration publicly confirmed that a “Disinformation Governing Board” working group had been created within the Department of Homeland Security. The news prompted a flood of concern about the impact of such an Orwellian organ on America.

But there’s no need to engage in hypotheticals to understand the dangers. One has to only consider the past of Nina Jankowicz, the head of the new disinformation board.

Jankowicz’s experience as a disinformation warrior includes her work with StopFake, a US government-funded “anti-disinformation” organization founded in March 2014 and lauded as a model of how to combat Kremlin lies. Four years later, StopFake began aggressively whitewashing two Ukrainian neo-Nazi groups with a long track record of violence, including war crimes.

Today, StopFake is an official Facebook fact-checking partner, which gives it the power to censor news, while Jankowicz is America’s disinformation czar.

If the Biden administration is serious about combating threats such as white supremacy, perhaps it should first reflect on the old Roman question: Who will guard the guardians?

StopFake was founded right after Ukraine’s 2014 Maidan uprising ousted the country’s president and swept a new, US-backed government into power. Formed by professors and students from the Kyiv Mohyla Journalism School, StopFake presented itself as a plucky, grassroots group wielding hard facts and semi-permanent smirks as it shredded Russian propaganda. It gained notoriety by producing slick videos hosted by dynamic disinformation warriors debunking the Moscow lies of the day.

Western reporters—and checkbooks—were paying attention. Shortly after its creation, StopFake began receiving funding from Western governments, including the National Endowment for Democracy—an organization mainly funded by the US Congress—and the British embassy in Ukraine. It was also supported by George Soros’s Open Society Foundation. (StopFake has run numerous episodes that cover Soros but fail to disclose this potential conflict of interest—a violation of basic tenets of journalism.)

Among StopFake’s hosts was Jankowicz, a graduate of Bryn Mawr and the Georgetown School of Foreign Service who was already part of the burgeoning disinformation warrior industry while in Ukraine as a Fulbright Clinton Public Policy Fellow. On January 29, 2017, she hosted StopFake Episode 117, whose lead story dealt with a perennial obsession of Russian propaganda: Ukraine’s volunteer battalions.

These are the dozens of paramilitaries formed in 2014 to fight against Russian-backed separatists in Ukraine’s Donbas region. From the beginning, Moscow focused on the violent and far-right nature of many of these units.

At the time of Jankowicz’s piece, the Russian press was bristling at Kyiv’s creating a new holiday to honor military volunteers—Moscow commentators depicted this as a celebration of far-right butchers. Jankowicz offered an emphatically different take.

“The volunteer movement in Ukraine extends far beyond military service. Volunteer groups are active in supporting Ukraine’s military with food, clothing, medicine, and post-battle rehabilitation, as well as working actively with the nearly two million internal refugees displaced by the war in Ukraine,” she added.

While Janowicz extolled the battalions, an on-screen graphic displayed patches of four paramilitaries: Aidar, Dnipro-1, Donbas, and Azov. All four have a documented record of war crimes, while Azov is an outright neo-Nazi group.

On September 10, 2014, three years before Jankowicz’s warm portrayal of volunteer battalions, Newsweek ran an article titled “Ukrainian Nationalist Volunteers Committing ‘ISIS-style’ War Crimes.” The story, which covered a report by Amnesty International, featured Aidar, one of the battalions lauded in Jankowicz’s segment. According to Amnesty, Aidar fighters amassed a record of “widespread abuses,” ranging from kidnapping and torture to “possible executions.”

Three months later, Amnesty issued an urgent report about Aidar and Dnipro-1—another paramilitary featured in Jankowicz’s segment—blocking food from eastern Ukrainian towns and villages. “Using starvation of civilians as a method of warfare is a war crime,” Amnesty stated.

(Of course, almost every war crime charged against one side in this conflict has also been charged against the other; Russia has reportedly recently been blocking food in its siege of Mariupol.)

The Donbas Battalion—the third paramilitary in Jankowicz’s segment—is another unit notorious for torture, as documented by the UN, among others. The fourth group, Azov, not only has its own history of war crimes, but is avowedly neo-Nazi; indeed, the Azov patch shown in Jankowicz’s video has a stylized Wolfsangel (the “N” with the sword)—a popular white supremacist rune used by groups like Aryan Nations.

Azov—which is now a premier hub of transnational white supremacy—has been extensively covered by Western media outlets, including by me in The Nation. Its nature was well known by the time of Jankowicz’s 2017 StopFake video. (In a 2020 book, Jankowicz briefly acknowledged Azov is a “far-right group,” but immediately pivoted to portraying them as victims of a Russian hoax.)

During Jankowicz’s tenure with StopFake (her last known episode aired May 21, 2017), the disinformation site continued being touted as a pioneer in combating Russian propaganda. In March 2017, a fawning Politico story heralded StopFake as the “grand wizards” of the anti-fake news ecosystem. It was an ironically prophetic description, given that Jankowicz’s misleading “nothing to see here” report about the battalions turned out to be a mere fraction of what StopFake has done for Ukraine’s far right.

By 2018, StopFake started defending C14, a neo-Nazi gang that conducted horrific pogroms of Ukraine’s Roma. After media outlet Hromadske described C14 as neo-Nazi, one of StopFake’s founders tweeted “for Hromadske, C14 is ‘neo-Nazi,’ in reality one of them—Oleksandr Voitko—is a war veteran and before going to the war—alum and faculty at @MohylaJSchool, journalist at Foreign news desk at Channel 5. Now also active participant of war veterans grass-root organization,” as if the fact that the gang has a veteran somehow precludes it from being neo-Nazi.

In 2020, StopFake defended C14 in a press release. The same year, news broke that C14 was aiding Kyiv police in enforcing Covid quarantine measures; StopFake labeled this fake news, denying C14 is far-right, describing it as a “community organization” instead, and citing C14’s own denial of carrying out anti-Roma pogroms as “evidence” of its innocence.

In reality, C14’s ties to Ukrainian authorities have been verified by Radio Free Europe (US government–run media), among others. By now, even the US State Department classifies C14 as a “nationalist hate group.”

StopFake has also continued defending the Azov Battalion. Last month, StopFake tweeted that the unit—which was formed out of a neo-Nazi gang, uses two neo-Nazi symbols on its insignia, and has been documented as neo-Nazi by numerous Western outlets—“doesn’t profess #Nazi views as official ideology,” labeling stories about Azov and neo-Nazism as fake news.

This is particularly disturbing because in February, Facebook reversed its ban on praising Azov. Facebook had previously banned the Azov battalion’s account as well as posts celebrating the neo-Nazi organization. The reversal is stunning, given the platform’s professed commitment to combating far-right extremism.

The “grand wizards” of battling fake news have even dabbled with Holocaust distortion, downplaying WWII-era paramilitaries who slaughtered Jews as mere “historic figures” and Ukrainian nationalist leaders, while attacking members of the US Congress who had denounced Ukraine’s glorification of Nazi collaborators.

Astonishingly, when Jankowicz herself was quoted in a July 2020 New York Times story about StopFake’s going off the rails, the article failed to disclose the fact that the disinformation expert being quoted used to work with the group.

Painting neo-Nazi paramilitaries with an extensive record of war crimes as patriots helping refugees, all while working with a “disinformation” group that turned out to run interference for violent neo-Nazi formations—that’s the experience Biden’s new disinformation czar brings to the table.

I said she worked in Ukraine posts up nobody cares.

Nobody bothers to see the connections between ukriane going back many years. Kind of crazy to be honest.

Do some fishing, snorkeling or whatever.

Maybe if you offered to pound his ass he would take you up on that offer.