Blackeye Promotions 4 in Asheville,NC June 17th is a stacked card that will feature 2 title fights and 5 female bouts with some of the most elite female fighters in the sport!!!
185 TITLE- Johnny Buck vs Danny Babcock
Buck is a phenomenal wrestler and a top prospect on the east coast MMA scene...Buck "Nasty" is fighting out of Asheville, NC and represents Team Husky... Buck is currently the Blackeye welterweight champion for Blackeye and is looking to hold both titles in the welter and middleweight divisions... He's coming off a huge win over Frank Wazzut who is a BJJ brown belt and had a ton of hype behind him coming into the Buck fight. Danny Babcock is a former RFC champion and is an exp veteran who has been in with some of the sports top talent such as Frank Trigg… Babcock has excepted this fight on short notice as Buck’s original opponent Dhiego Lima was scheduled to fight, but was given a multi fight contract with the M.F.C. which does not allow him to fight outside of the promotion… on a side note you should really research the ongoing Buck vs Lima brothers feud which has really turned out some pretty entertaining  verbal sparring matches as of late. Buck vs Babcock promises to deliver fireworks and a new Middleweight champion will be crowned!
*Olympian vs Olympian Sara McMann   vs   Julie Malenfant
Sara is an Olympic silver medalist in wrestling for the United States… Sara is undefeated as a pro and is looking to use her world class wrestling and athleticism to take over the sport of MMA! Julie is a bronze medalist in weightlifting for her country of Canada… Julie has trained with canadas top mma fighters and currently resides in the states… When we were looking for opponents for Sara most women declined or were asking for tto much purse, but when the call was put into Julie she said yes immediately…Will Julie’s strength be enough to hold off Sara’s wrestling? Will Sara be able to hang with Julie on the feet if so? Very exciting Fight!
*Kelly Warren   vs   Avery Vilche
Kelly is a top undefeated prospect in women’s MMA and is coming off a quick submission this past weekend…Kelly is a very well rounded fighter and is sporting a 3-0 record as a pro… Avery is a true vet who is down to bang! Avery is an IFC and Hook N Shoot vet…Kelly is known to bang it out at times and source close to both of the ladies are expecting a good ole slug fest!
*Kat Alendal vs Ediene Gomes
Kat is a very versatile fighter but prefers to bang! she is an outstanding striker…Kat trains at the Skrap Pack with such fighters as Gilbert Melendez, Jake Shields, and the Diaz bros… She is a Elitexc vet and has gone the distance with Julie Kedzie… Ediene “India” Gomes is a fantastic fighter with an impressive 6-2 record…She trains at ATT in coconut creek with elite fighters on a daily bases…Ediene is truly well rounded in all aspects of MMA and this should be a war!
*Colleen Schnieder  vs  Vanessa Mariscal
Colleen is very versatile fighter training with some of the sport’s most elite fighters at the Skrap Pack with such fighters as Gilbert Melendez, Jake Shields, and the Diaz bros… She is a strikeforce vet and is coming of a .17 second submission win at a recent gladiator challenge event. Vanessa Mariscal is an undefeated fighter who also trains with top fighters such as UFC fighters Vladmir Matyushenko and Jarred Hamman in California…Vanessa and Colleen def have the makings to be a very technical war and could likely be fight of the night!
*Matt Covan vs Matt Munsey
*Angelica Brotherton vs Mary Ellen Cono
AMMYS
*Featherweight Title-Zach Sharpe  vs  Charles Hall
Zach is a top undefeated prospect on the eastcoast ammy scene at 4-0…Zach has an extensive karate and wrestling background training at Team Husky in NC… He is coming off a .12 second KO at the last Blackeye event which clinched his shot at the vacant title… Charles Hall has a lot of experience as an ammy and holds the Southeastern Fighting Champions featherweight title…Hall is a true specimen and very big at this weightclass..He is also a former drill sgt for the army…Hall posses great ground skills and hopes to be the first blemish on young Zach’s record.
*Nick Martino vs Brian Molina
*Micheal Fortin  vs   Aaron Rosenbloom
*Ryan Conn   vs  Brandon Ryals
*Jason Faglier   vs   Michael Stephens
BlackEye_Promotions June 9, 2011, 3:53am #2

Nice card!!! They must have a great matchmaker! LOL

Simply the best. Been saying it for a long time. :)

DikCoxxx - Nice card!!! They must have a great matchmaker! LOL 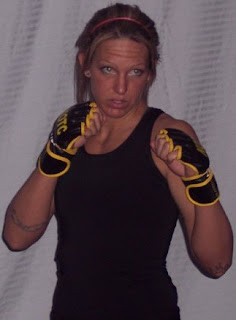 Is this event being streamed live on gofightlive?