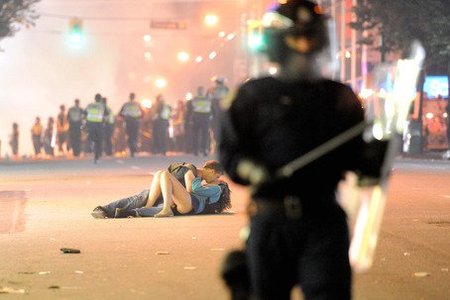 Canadian hockey fans took to the streets last night (June 15, 2011) to vent their frustrations after the Vancouver Canucks were blanked by the Boston Bruins 4-0 in game seven of the NHL Stanley Cup Finals. As with most riots, bottles were thrown, cars were burned and storefront windows were smashed.

Sir Frederick Arthur Stanley, Lord Stanley of Preston and son of the Earl of Derby, was not impressed.

How is this relevant to mixed martial arts? UFC 131: "Dos Santos vs. Carwin" was held (without incident) at Vancouver's Rogers Arena last Saturday night (June 11) right smack in the middle of the NHL Finals.

Consider for a moment, the difficult battle Ultimate Fighting Championship (UFC) had in securing regulation for MMA in Vancouver. Even when given the green light, women and children were whisked away to the cheese cellar as men boarded up their windows and bolted down their doors.

City officials even demanded an increase in police presence to handle a potential outbreak of violence. But UFC 131 came and went without a single report of post-fight shenanigans.

That's not to suggest that MMA caters to a higher class of sports fan, or that the average fight fan isn't capable of bad behavior, but it does suggest that MMA is a completely different type of sport and one that doesn't promote violence, despite what takes place inside the Octagon.

For many on-lookers, mixed martial arts looks like a violent sport. Two men trading blows, blood on the mat, an unconscious loser. However, there has never been a riot or violent public outburst following a sanctioned mixed martial arts promotion, any where in the world, ever.

On the other hand, look at hockey, ten men on a sheet of ice - as hard as concrete -, gliding on blades of steel - sharp enough to sever a jugular vein - slamming into each other at high rates of speed and beating each other with sticks. This is no biased view of the sport, I, as a Canadian have been involved in hockey since the age of 5 and have seen enough frightening collisions, bloody fist fights and concussions to last a lifetime. In the team sport they provide a false sense of unity to its fans in order to create a customer base. Meanwhile, the UFC promotes fighters as individuals and leaves the fans to choose their favorites.</p>
<p>Because of these horribly brutal fights, collisions and extremely lax, almost non-existent rule book, hockey is a dangerous sport. But, when it comes down to a major title, like the Stanley Cup, the sense of unity held by fans is enough to tear a city to threads. Meanwhile, in the world of mixed martial arts, fans debate about who might beat who, and nobody wears aGSPjersey thats been a staple of the region for 50 years, nobody burns cop cars because Leonard Garcia got the nod over Nam Phan and nobody riots when there fighter loses.

The respect that the fighter`s hold for themselves and each other is shared by the fans. There is no franchise named Tito Ortiz that brings a new fighter up, calls him Tito Ortiz and allows him to fight under that legendary moniker. No, instead there are a group of individuals highly trained and disciplined, sharing an experience with another athlete while they slug it out for the fans delight.

Anti-MMA crusaders like New York Assemblyman Bob Reilly have long contended that "violence begets violence," and that keeping the UFC out of the "Empire State" will help keep the city safe from testosterone-fueled maniacs looking to kick some ass following a UFC pay-per-view.

I think the incident in Vancouver (and countless other cities both stateside and abroad) has proven him wrong.

Haha stupid Vancouver, go ahead keep shitting where you eat!

I'm sure he cares

Good thing the finals WEREN'T the night before the UFC in Vancouver or else you KNOW the UFC would be taking the blame.

Vancouver is full of sore losers because they know thei team HAS NEVER won the Stanley Cup and NEVER WILL !

That is super BOSS!!!

Reilly's head explodes upon reading that.

Best thing about the pic, the dude on the ground is a fellow aussie, we know how to handle a situation