JimmersonzGlove probably won't be after he loses our sn bet :)

I'm really looking forward to the all access primetime show on Brock, since he's so private personally.

cant wait for the primetime show...

What I love about the upcoming primetime show, is that Brock is usually very quiet about his personal life and his training before a fight. Now, I realize that they aren't going to give anything away, but it will be a glimpse into a side that we don't usually see.

He is the absolute worst at selling a fight, since he just hides out and trains. So this should be cool.

LOL, enjoy your fantasy while you can. Only 23 days left in BROCKTOBER!

Brown's going down in BROCKTOBER!

Justinmacd - That's one of the funniest romo's I've ever seen. Cheers to the creator. 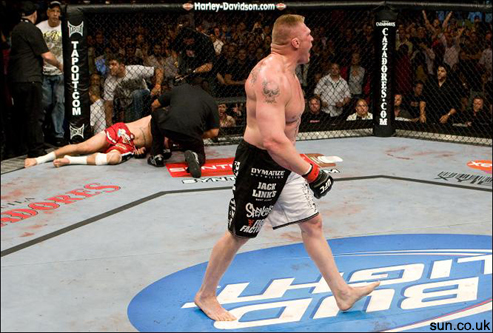 He just had to go rummaging in the strawberry patch...

I know right?...Cain might just wanna settle for some Plant City strawberries cause he'll never make it out of Brocks patch alive.
grimer September 30, 2010, 12:30pm #17

hmmm...he looks a lot bigger in that wwe pic.