Capsized in a canoe on a lake, with a girl who couldn’t swim. We were both like 13-14. She immediately started to thrash and panic, and I managed to hold on to the canoe with one hand and hold her up by her armpit with the other, keeping us both head above water. She calmed down, and I told her we need to get to shore which was not very far away, but she has to be calm and not panic. I had a death grip on her armpit, lol. Swam with her to the shore without much trouble, though I was getting tired as hell (it was maybe 30 feet or so before we could stand). Yes, I did get to feel her boobs.

Indeed, it is scary.

Was on a river trip with my ex-wife and some other couples years ago.

Ex-wife had too much to drink and fell off the boat.

I jumped in to save her and she grabbed me by the throat and almost took me down with her.

About 30 seconds of hand fighting and I managed to get a grip on her throat and choke slam her down the river.

He was standing like 2 feet over from where he was drowning. Could have sank to the bottom and walked 2 feet to safety

Panic is the reason most people drown

Indeed, it is scary.

Was on a river trip with my ex-wife and some other couples years ago.

Ex-wife had too much to drink and fell off the boat.

I jumped in to save her and she grabbed me by the throat and almost took me down with her.

About 30 seconds of hand fighting and I managed to get a grip on her throat and choke slam her down the river.

Worth it for boobs.

Pretty damn nice house…were the owners in there on the floor with their throats slit?

I kid of course.

How can you get to that age and not be able to swim?

Try most of asia, I met a Naval guy in Korea who couldnt swim, he said its pretty common for dudes in the navy not to be able to swim over there.

LOL… in the Navy

It wasn’t the guy thrown that couldn’t swim, so pretty dumb by the non-swimming thrower. And well, they did push him to safety.

We had a bully at my highschool that fell face first in a tiny PUDDLE of water during a soccer game turned football ha ha as the teacher wasn’t there. He panicked and started “swimming” like a drowning man. At first we were thinking he was joking so did nothing. He stopped on his own, realizing it all, and I’ll always recall his look of total embarrassment ha ha.

If anyone should know better …

This tv is guaranteed to never be stolen 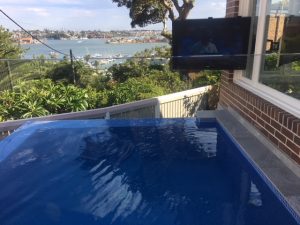 One of my class mates was pushed into a waterfall pond. He drowned and his body was recovered a few days later.

If someone is drowning and death grips you while you are trying to rescue, you want to swim down underwater with them, they will let go.

I never had it happen but was trained that if someone is ape shit drowning (and could drown the rescuer), you let them go under, then rescue them.

That said, this video is disgusting.

Not teaching your kids how to swim at an early age is parental neglect.

Told my wife there are two things are children need that are essential skills; swimming and self defense. They don’t need to beat Michael Phelps but if I throw them in the deep end they need to be able to swim to the side. Way too many stories of kids drowning due to them fucking around by a body of water and not knowing how to swim.

One of my crowning achievements in life was teaching my oldest to swim. I had no clue how to teach her but I did. She is now a lifeguard and swim instructor and was a competitive swimmer that placed in our regionals. Since she works for the city her recommendation letter for college came from the Mayor.

All true but I mean it’s a pool though. I could have held him up and walked him to the shallow end while walking underwater.