First dose of Pfizer sore arm for a couple of days. Nothing major. Affected my sleep a little, but not too much. Second dose and a bit of soreness the first night and what seemed like some slight soreness lower down near my elbow on day two (could be from working around the house and in the yard though). Pretty much pain free by day three. Actually less for second dose than first dose. Much to do about nothing for me.

Correlation does not equal causation. Too many people refuse to see that reality.

Actually, correlation is often the main factor in causation.

To claim that non-correlation is the main factor in causation seems quite silly.

Read more carefully. Does not equal. My point is that a handful of blood clots associated with millions of vaccines is not necessarily more likely the result of vaccines than the same handful of blood clots being associated with eating pizza the night before the clots appeared. Same as car accidents being attributed to Covid or other causes of death being attributed to Covid. To address your second point, I in no way said anything about non-correlation. That of course if foolish as well. 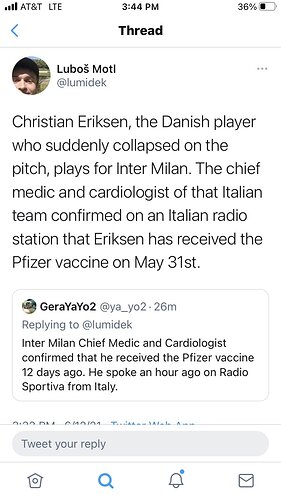 And you are saying?

You really don’t know what he is saying?

The pfizer shot has been linked to myocarditis in men under 30.

Myocarditis can potentially lead to cardiac arrest in rare circumstances.

Though nothing has been confirmed it appeared that eriksen suffered a cardiac arrest on the pitch.

Whilst it should be considered coincidental at this point, it cant be ruled out as a potential cause in the chain of events.

Every death should not be ruled out. Got it. Psst are there still Covid deaths going in? More Vivid deaths are vaccine deaths? I know. There is no way of knowing. I am so I think CT shouldn’t be ruled out though I think it is easily the front runner. Lol

And I really wanted HIS take int it. I assumed since he posted it then he believed it

Pfizer shot linked to myocarditis, myocarditis linked to cardiac arrest. Its not exactly a conspiracy theory.

There are cases of footballers dropping down on the pitch but I cant remember the last time it happened on the international stage at a big tournament.

These guys are tested and screened for ailments so much at this level. I hope we don’t see anymore of this at the tournament.

My mother, who is old, got both shots which I believe was the Pfizer vaccine. She had no ill effects at all.
However, she has type O blood and that blood type is associated with less problems with COVID.

“There was also a lower risk for severe COVID-19 illness or death associated with type O blood group versus all others.”

Type O- blood may have a protective effect against COVID-19

The pifizer vaccine is likely 99% plus safe. There are links to issues with it though.

Sort of like covid is 99% plus no big deal for certain age groups and categories.

I have no issue with anyone that wants to or doesn’t want to get the vaccine. I do however find the whole situation from the start of the pandemic shady as hell.

Just ignore rushinbear. He is legitimately the slowest person on this site (no troll). I have no idea how he’s a moderator.

He seems a good guy. Has opinions vastly different to my own, but that’s OK

Someone that actually understands that someone not sharing the same opinion only means that. Then you have those that are so high on their horse that it’s their way or else they are %##^*.

I have no issue with anyone that wants to or doesn’t want to get the vaccine. I do however find the whole situation from the start of the pandemic shady as hell.

It’s shady but IMO the conspiracies lie with the source. Gain of Function research directly funded from Fauci and the NIH. To a lab with shitty safety protocols who were doing level 4 research in their level 2 section.

I’m sure if we knew then everything we know now, we would have handled the pandemic differently. But I don’t think there’s anything unusual about the path to develop a vaccine. That’s exactly what would be expected in a pandemic.

What is fortunate though is the CFR is not as high as the original assumed 3.5%. And this could have just as easily had a 35% fatality. The world would look quite differently now if it were that high.

Crazy man the lived through a year and a half of covid but can survive 2 months after his shot, I know just another coincidence. Also I posted it due to his job

I also mean shady in the sense that governments have jumped on the back of it to make money. Here in the UK, there were several mps that made money through stocks and PPE etc…

I also find it weird that they killed off a load of small businesses but the major shopping chains were allowed to stay fully open with little to no restrictions.

We had an eat out to help out scheme here last summer which encouraged ppl into the restaurants for cheaper food. If this were the big bad wolf at the door that the media has tried to make everyone believe then something like this would never have even be thought about.

With all these new variants etc… i just feel that its being prolonged for other reasons. I have no idea what those reasons are, but we’re not meant to - the handling of the whole pandemic by the UK government has been poor to say the least. This government likes to keep ppl below the breadline as they are easier to control. I am not surprised so many conspiracy theories have come out of this situation, as there is legitimate traction with some of them.