CA: here’s a no interest 17% loan to help you buy a house 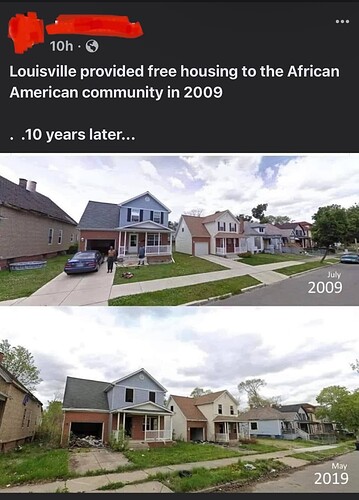 Damn… even the shutters are gone.

Giving poor people affordable or free housing is a net loss because most can’t or won’t maintain it.

Just like this program. You allow poors to buy more than they can afford and most won’t maintain the property and most will likely default on the loan.

Poor people need every one of their bills paid for them so there’s no fear of a lien on the property. That’s exactly what welfare is.

What’s bad about it?

Don’t you remember the previous housing crisis where banks loaned money to people who really couldn’t afford to buy the houses? They ended up defaulting on their loans and crashing the econemy.

At least back then, the buyers had come come up with a down payment. Down payments are supposed to help ensure that buyers can afford their house, as well as give them an incentive to not default (because they have some skin in the game).

Now, unqualified buyers can buy houses that they can’t afford and then just walk away from them.

This is horrible for the housing market, and probably the economy as a whole.

Why did they rip the shutters off the second floor windows?

An unkempt lawn is explainable, but ripping the shutters off? That actually takes some effort for no benefit.

Looks like the entire window is missing. I’m sure everything of any value was stripped clean off those homes.

At least back then, the buyers had come come up with a down payment.

Yes, today consumers have way more expenses that are considered “needs” like their phone plans, entertainment subscriptions, weed habits, etc. that distract from savings. So here they are prioritizing garbage products and services over housing or retirement.

At least back then, the buyers had come come up with a down payment.

I get what you do. Do whatever entertains you. I just wish you didn’t have to be trying to troll and derail soooo many threads. You really do ruin threads for other posters who aren’t here to wear their political uniform.

And I can’t put you on ignore because that’s not manly and against free speech according to teh OG lol. But you are everywhere. Doing the same thing post after post.

He’s a fucking dummy living on some bullshit PTSD claim.

Well yeah, I don’t disagree a lot of people waste their disposable income on stuff that isn’t really a necessity (although I argue smart phones are 100% a necessity now), but even with cutting out netflix and starbucks, that still is peanuts and not even close to being the difference between having enough for a down payment on a million dollar house (fixer uppers in my area are going north of a million now)

Just a genuine question here, because i’ve never researched it, but what is the default rate among veterans who use the zero down va loan?

Perfectly stated. He sucks. The worst poster on the OG by leaps and bounds. And not because he has a different viewpoint than most of us it’s because he is pure troll. Doesn’t even attempt to debate or exchange discourse. I wish they would ban him.

Just a genuine question here, because i’ve never researched it, but what is the default rate among veterans who use the zero down va loan?

They do get free healthcare already. But with the zero down home loan, that should be a good comparison to look at as to whether or not this would be succesful, no?

$54 BILLION and counting in Cash and Equipment to one of the Top 5 most corrupt Governments in all the world.