Cain Velazquez Already Back in the Gym 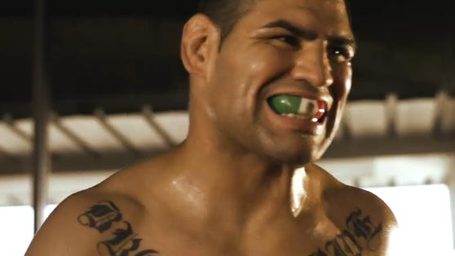 Down, but not out.

UFC Heavyweight Champion Cain Velasquez today (Jan. 17) tweeted a health update following his recent surgery to repair a torn rotator cuff that is expected to keep him out of the Octagon until late 2011.

And while most post-op patients are at home watching television and eating ice cream, the undefeated American Kickboxing Academy (AKA) star is already back in the gym:

After making it look easy against his first seven opponents, Velasquez scored a "Knockout of the Night" against mixed martial arts legend and former Pride Heavyweight Champion Antonio Rodrigo Nogueira, securing himself an October 2010 title bout opposite division champion Brock Lesnar at UFC 121 in Anaheim.

Patient pugilist Junior dos Santos was expected to get the first crack at Velasquez' belt; however, injuries suffered in the Lesnar bout failed to heal on their own, leaving the newly-minted champion with no other alternative but to undergo invasive shoulder surgery.

And that would have kept "Cigano" out of action for over a year.

Well, a Brazilian's gotta get paid, so out went his claim to the division's number one contender spot (by choice) in order to cash in on a big ticket payday against Lesnar, who will likely face Dos Santos at UFC 131 on June 11 following their respective coaching gigs on The Ultimate Fighter (TUF) 13.

And you can be sure it's a bout that Velasquez will be watching very carefully, as he's expected to face the winner in his return bout in late summer or early fall.

But will he be ready?

thats guys work ethic and gas tank is legendary, I'd be shocked if he didn't get back to training faster than average

Clipsburgh - I just hope he doesn't over do it to soon and gets injured again.