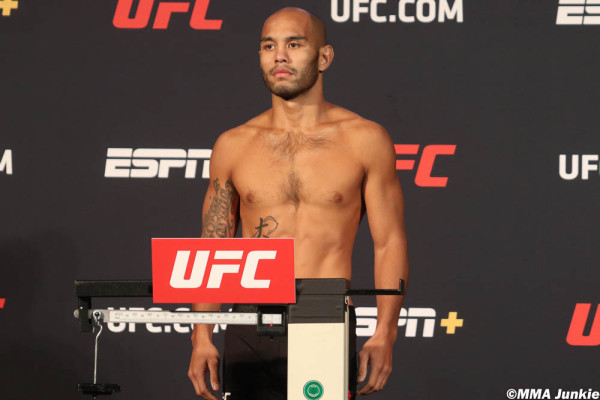 Frank Camacho in car accident, out of UFC 263; Terrance McKinney agrees to...

An unfortunate turn of events for Frank Camacho has led to Terrance McKinney getting his UFC opportunity on very short notice.

UFC 263 has lost a scheduled lightweight matchup after one fighter was involved in a car accident.

A preliminary bout between Matt Frevola and Frank Camacho will not proceed as planned after the unfortunate turn of events.

Camacho (22-9 MMA, 2-5 UFC) was set to return to action after a year away from the cage but was involved in a car accident in Los Angeles, forcing him out of Saturday’s fight with Frevola (8-2-1 MMA, 2-2 UFC), a person with knowledge of the situation told MMA Junkie on Tuesday.

Camacho’s injuries are not believed to be serious or life threatening. There are no further details at this time. Camacho made a Monday appearance on MMA Junkie Radio.

Frevola will remain on the card. According to two people with knowledge of the situation, Terrence McKinney has verbally agreed to replace Camacho. MMA reporter Marcel Dorff first reported news of Camacho’s withdrawal

McKinney (10-3 MMA, 0-0 UFC) is coming off a first-round TKO finish in the main event of LFA 109 this past Friday. The fight will serve as his long-awaited UFC debut on very short notice.

In July 2019, McKinney competed for a UFC contract on Dana White’s Contender Series but was knocked out by a Sean Woodson flying knee in the second round. He’s 3-1 since then and riding a three-fight winning streak.