Anyone hoping middleweight Chael Sonnen will start an epic bout of trash talking with Michael "The Count" Bisping might find themselves let down.

"I'm a Bisping supporter," Sonnen says. "I'm not on the anti-Bisping bandwagon. I never have been." 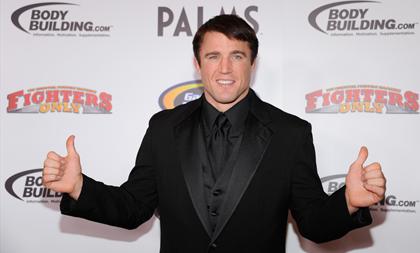 CAPTION
By Ethan Miller, Getty Images
Bisping replaces the injured Mark Munoz as an opponent for Sonnen in the co-main of the Ultimate Fighting Championship's Jan. 28 show in Chicago. The winner will face champion Anderson Silva later this year.


USA TODAY spoke to Sonnen on Tuesday, minutes after UFC announced the change in opponents. Excerpts from the conversation:

What was your reaction when you first heard that Mark Munoz was injured?

I don't know if had a reaction. I don't like to hear anybody being hurt, in the ring, outside of the ring. So I wasn't happy about it

I hope he's ok. I hope it's a matter of "Take a little ice and a couple of Tylenol and you'll be back," but I don't know the extent of it. I'm not a doctor.

Do you think Bisping has earned the right to fight for a title shot?

I'm a Bisping supporter. I think he has. I think he's fought a lot of important matches.

I don't know how tough the guys he fought were, how many ranked guys he had -- I'm not terribly familiar with his record. But at the end of the day, you can say what you want about his opponents, he doesn't pick his opponents. They pick his opponents and he goes in and he wins over and over again.

So I'm not on the anti-Bisping bandwagon. I never have been.

When you think about the way he generally fights, do you think for you he's a more difficult or easier opponent than Mark Munoz?

I think there's a couple of guys on the roster who I sit back and look at and think, "Geez, I'd just as soon not have to fight that guy," purely based on style. Purely based where you look at and go, "I'm not just not sure what I would do." Munoz is one of those guys.

Munoz was on that list. So mentally, in my mind, I think Munoz is a real fierce competitor.

But I don't have a lot of ill will towards Bisping's skills either. I watch him, and like I said, more than anything, I watch him over and over again.

In some ways, Bisping's about as far from Munoz stylistically as you can get. How concerned are you about being able to adjust your game plan so close to the fight?

I'm not ready yet. If you were to call me and say, "Hey, Chael, are you ready to go?" I'd say, "No, I'm not." But the good news is, I don't have to go today. The fight's a little bit down the line and there's still time to prepare and zero in. ... I've got enough time to do, but I've got just enough time. It's right around the corner.

My focus is on me. It's not on whoever they put across from me.

Given that Bisping tends to keep his fights standing, how likely are we to see a repeat of your approach in the Brian Stann fight?

You never know. I don't ever plan for those things.

With the Stann fight, I felt, "Well, if there's an opportunity to take him down, maybe I can score some points from down there." But I didn't know if I could take him down. I wasn't confident in it. So you always look at plan B or plan C, what's going to happen next if this doesn't happen.

That's the way my mind works. I kind of jump around a little bit and I do that in an attempt to be prepared for whatever may come at me.

What did you think of Bisping's fight with Jason "Mayhem" Miller?

I think in fairness, even though Bisping went out and did his job, I think maybe Mayhem made it a little bit easier on him. I don't think Mayhem fought top notch that night. That's the reports that I'm hearing.

But who cares? Again, I get all these naysayers about Bisping, but the bottom line is, he wins. He goes out and he wins his fights. He should be credited for that.

How would you describe Bisping as a fighter? What jumps out about his style?

I think he's real active. I think if he had a strength, it would be the fact that he'll go hard. He'll fight hard the whole time. He's been in some real donnybrooks that have come down to the last moments of the last round, and he's able to continue fighting. While other guys are fading, he's still pushing. I think he's a very tough guy in that regard.

I think he's good. I hear a lot of negative things said about him, but I think most of it comes from frustration of maybe his personality or something like that. I think if you're real objective and you look at his skillset and his in-ring ability, you'll know that he's a talented guy.

You just mentioned his personality -- why do you think so many people dislike him, and on the flip side, why don't you?

I can only guess. He appears to be a little bit brash. He's definitely cocky and arrogant, which is two qualities that I like in a person. I like a cocky guy and I like an arrogant guy, so he earns points with me in those regards, but I think it turns a lot of people off.

I don't really know. When you get a guy that's out there demanding title shots and you look at his list of accomplishments, you kind of go on, "Who'd you beat? Why do you think you deserve that shot?" And so it gets a little bit confusing in those regards.

I don't have his record in front of me, but I think outside of the (Dan) Henderson loss, I'm not sure he's ever been beat in the UFC. I believe they gave Wanderlei (Silva) a win over him, which was possibly the right call, possibly not; I know there was some controversy around it.

But I've never even seen Bisping in trouble. I've never seen him come out of there cut and scraped and bruised. He seems to go in, take care of business and go home.

Do you think Bisping could beat Anderson Silva?

Almost any statement can be true if you include the word "could." I wouldn't pick him to beat him. I think match-up wise, it may not be that favorable of a stylistic match, but I don't know.

I can give you a perfect example. I took (Anthony) "Rumble" Johnson and I took Chad Mendes just over the weekend. So it shows you what I know.

I don't want a shot. I've never asked Dana White for a shot at the title. I want the title, there's a tremendous difference between my mindset and everybody else's.

If you want your name in lights and you want that one big paycheck, go out and get your shot. I don't want either. I've got plenty of money. I've got plenty of notoriety. What I don't have is a 12-pound gold belt reminding me each day that I'm the baddest man God ever made. So that's what I'm after and that's what sets me apart from everybody else.

I'm not a naysayer, man. I'm a supporter of Bisping.

First off, I never go after anybody unless he's on top.

When I started on the Nogueira brothers -- and of course, I leave them alone now; I don't take any pleasure in them falling from grace, or certainly the big one having to go through an injury; that brings me no pleasure at all. But when I started on them, they were supposedly this untouchable pair, fighters of fighters, men's men. And I'm looking at it going, "No, you're not."

It's the same thing with Wanderlei Silva. I don't taking any pleasure in kicking Wanderlei now, now that the word's out that he's yesterday's news.

But at the time when I started picking on him, it's because nobody else would. A guy puts a tattoo on the back of his skull, puts his beady eyes on you and rolls his wrists around, and all of a sudden the whole world thinks that's scary. That doesn't do anything for me. I'll slap you right on your face while you're rolling your wrists around. My point wasn't so much to attack Wanderlei, as it was to let the rest of the world know, "Who cares? Who cares about his tattoo and his beady eyes and his rolly little wrists?

That's really where it started with Anderson too. Anderson became this untouchable guy. I've got to walk around in the back at the UFC and watch fellow fighters ask him for his autograph, and it makes my stomach sick.

If you're going to be a fighter in the UFC, you need to be fighting for one reason, and that is the championship. If the day comes when I realize that I just can't reach that championship, I'm out. I'm not going to stick around for a paycheck or for the applause of the crowd. I'm not in it for that. I'm in it for the championship, the one and only reason you should be in this sport.

He hasn`t had time to write any material yet.

obey Wonnen, destroy sonnen. I guess what i mean is I want the evil trash talking sonnen to verbally cut bispings cock off ala dan quinn

Sonnen's definitely gone up in my estimation...sounds like a level headed guy.

I think Sonnen is shifting all of his focus to the actual fight. After he steamrolls Bisping I think we can all grab our popcorn and listen to him trash Andy.

Chael is going to be writing alot of material on bisping , by monday he will be talking stuff on the count

Fantastic interview from Sonnen....although I'm sure he'll bring some trash talk in the next week or so despite it.

He's pretty much just said what the Bisping fans have been trying to communicate for a while. He's right.

ramit upper -  He hasn`t had time to write any material yet.

More like his writers haven't had time.  He is a fraud, and will be exposed by Bisping.