Chandler KO Of The Year ? - Bas 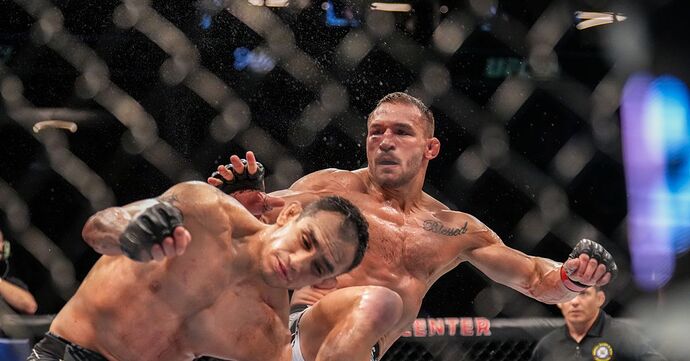 Former UFC heavyweight champ and Karate Combat commentator Bas Rutten arrived a little too early to mix his martial arts as thoroughly as he desired. In his heyday, stopping the wrestler was a very good start.

These days, Rutten looks at the myriad of techniques from his primary art of Kyokushin karate and can’t help but feel proud at the home they’ve found in modern fighting. Whether it’s in the octagon or in the hybrid striking competition of Karate Combat, they’ve become a part of the game because they’re effective.

“These guys grind their techniques in over and over again,” Rutten, who calls the action in Season 4 of Karate Combat debuting online on Saturday, told MMA Fighting. “In MMA and kickboxing, it’s all about how hard we can kick because we want to knock people out. They have these faster kicks, and now, all these faster kicks have full contact, and it looks really good.”

Rutten has always had a good eye for the setups of striking techniques, but even he was taken aback by the work of Michael Chandler, who became the latest UFC fighter to viciously end a fight by front kick when he caught Tony Ferguson on the jaw at UFC 274.

Just looking at the pictures of the fight, Rutten said, “Boy, then you can really tell the impact. That was beautiful. This could be the ‘Knockout of the Year’ – by leg.”

It’s extremely difficult to pull off such a technique in a high-level fight. Your chances get better, however, if your opponent hasn’t experienced a particular setup. Ferguson may have been just as aware of his surroundings as other opponents, Rutten said, but if he hadn’t experienced that particular front kick attack, he may not have known what to look for.

“If this doesn’t happen to you in training, the chances that you’re going to get caught with it if somebody worked on it for the fight are extremely high,” he said. “If somebody in training is throwing front kicks to the face, you start measuring the leg automatically.”

Rutten said when he first started training in the U.S. for fights, he worked with a Krav Maga specialist that went full-contact in the gym. No targets were off-limits, including the groin.