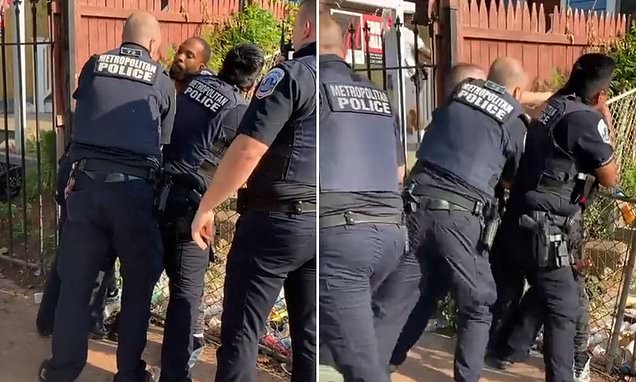 Video shows a white DC Metro police officer punching a black suspect a dozen times during a weapons-related arrest on Sunday. The incident has led to three officers being suspended.

Fucking stupid. They hit the piece of shit enough to get him cuffed. That’s it.

Not only the gun charge but the felony drug charge. And the other guy they arrested is having charges dropped also.

They’re sending a message to criminals that all they have to do is resist and they can get away with whatever.

Then the mayor and chief state “we’re going to keep fighting to keep guns and drugs off the streets”.

No, you’re literally keeping them on the streets.

Video is very disturbing in the sense that a dangerous criminal armed with a gun is clearly resisting arrest and creating a dangerous situation for cops but he is viewed as a victim. He had every opportunity to allow the cops to cuff him without any force being used.

Just as worse, the other P.O.S.'s throwing objects and attacking the police will not be charged.
Even worse, the cops are being charged with crimes.

Ironically, this will further damage the black community in D.C. because cops are not going to make any attempts at catching bad guys which will obviously result in far more crime. Enjoy your cities…

This is what happens when you ban holds (restraint and choke).

Cops should just leave these areas to themselves and go hang out somewhere during the day.

WTF!? The dude is armed and actively selling illegal drugs and the cops are in the wrong!?

The end result if they keep going down this road is going to be an emboldened criminal element who will get more brazen and more violent. And when the pendulum swings back from that we’re gonna see a much more aggressive police force because that’s what it’s going to take to bring things under control.

I dont get why you’d drop charges against him. If anything, they should be charging cops with excessive force. Didnt watch video but I dont get why stuff like this results in dropped charges rather than keeping the charges and then additionally charging the cops.

If anything, they should be charging cops with excessive force.

do is resist and they can get away with whatever.

You forgot that they have to yell, “I can’t breathe!” at least 20 times no matter what.