He’s the champ no?

No one is taking him down and keeping him down. No one here is elite enough to pick him apart. I don’t see anyone having the ability to knock him out 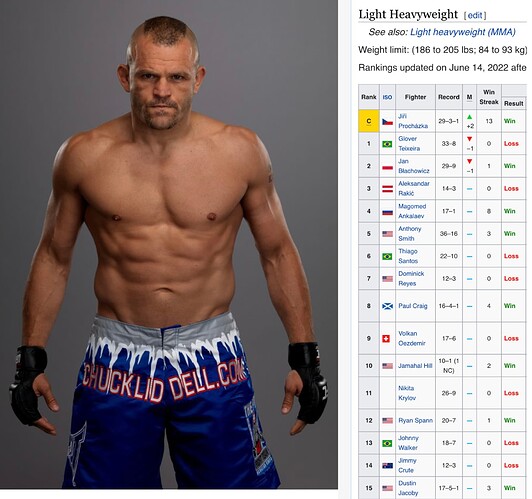 Not sure about champ, but definitely possible. He’s not small. Has a good reach, chin, KO power, good defensive wrestling.

He would have as good a chance as anyone but his real specialty was beating up grapplers. The division is now full of strikers. He struggled with most strikers he fought.

205 division is weak sauce now…. Chack and Tito would run through it

Murillo Bustamante arguably won that fight he had against him even the standup.

The Russian 185er beat him up stabding too. Chuck probably isnt in the top 15.

Lay off the crack pipe

No, Chuck was very of his time. Glover & Jiri would beat him quite easily I feel. Even guys like Oezdimir it’d be a toss up

Lay off the crack pipe

Arent you a new mma fan? You dont know anything.

The first ufc I ever watched live was 47. Liddell Ortiz

So I know how great chuck was. He was damn near impossible to take down and if you were lucky enough to get him down he got back up instantly

Chuck is so underrated in his Prime. I think at his absolute best he had a great shot at KO’ing guys like Jan, Jiri, and the former Champ who was his old sparring partner when he was in his Prime and LHW Champ in Glover.

People see him fight with his hands down like it wasnt intentional because his Chin and Recovery was so good in his Prime he could bait guys in and eat 2 or 3 to give 1 and his 1 was usually the big one. He’s not a boxer he’s small glove KO artist.

He usually kept his hands down like that because he was used to fighting grapplers. When he started fighting strikers he got laid out. Rampage and Rashad for example.

Well take a look at his fight vs Alistair Overeem… who was a much much more technical striker than Chuck. But Chuck’s Chin, Recovery, and Power was the deciding factor in who got KO’d and who got their hand raised.

Rashad faced the shell of Chuck with his Chin not even close to his Prime Chin.

This what I am talking about when people confuse broken Chuck with Prime Chuck and don’t give his Prime run and quality of opponents and accolades his due credit.

He beats them all

Contender for sure. Champ? I don’t think so