Cm Punk not expected to return to AEW

Not trying to work it out with Punk and the Elite is the biggest mistake AEW could make. Interest picked up again and everyone can get the rub from this drama…. But instead more wasted opportunities.

I understand why some would want to salvage this for the purpose of capitalising, but we’re not there and Phil may be too big of an asshole to effectively play ball with, or trust.

Kevin Nash on Punk and AEW:

I was in the ring at 55 and he was cutting the promo on me, ‘Click. Click, I can hear your knees, lol. I thought you were dead’ That motherfucker is cutting that promo on me and he sits there at 42 years old."

"I guess in retrospect, like, when I actually thought about it, it was like, oh no, he didn’t lose his shit. That’s toxic shock. He didn’t pull his tampon out. He’s fucking got toxic shock syndrome.

I thought about that and I googled him. I said, 42. The dude didn’t wrestle for 10 fucking years. It’s like a ‘75 Eldorado with 102 miles on it. Motherfucker, don’t tell me you’re tired. Shut the fuck up.

All you guys at AEW, you bunch of dumb motherfuckers. You bunch of dumb motherfuckers. You’re 1099s. You know what that means? You were painting somebody’s fucking house, you guys got in a fight, and they told you you’re all suspended. Wasn’t it after the fucking deal? You guys can’t work that out? I haven’t heard if they were suspended without pay. So they’re the fucking cop that fucking shoots the guy 23 times in the back and then sits at his desk. That’s an effective way to fucking manage. What a bunch of shit.”

Paige doesnt need to wrestle much. Let her manage a few dudes.

I will lose it if she gets Hangman and has DDP as their advisor and they come out to Bob Seger.

Too late, already did.

Don’t forget about PVZ either! Did she get injured or was it a one and done deal with AEW?

Can Brian Cage join the faction?

In a page rage in the cage for minimum wage on AEW Rampage.

and has DDP as their advisor

So her name is Payge Page? That’s great. She can join the faction.

“I did hear Wade speculating about a buyout and let’s put it this way. I wouldn’t be the least bit surprised but nobody, nobody, nobody is talking right now. So everything is speculation. Nobody is saying anything.”

Alvarez continued, "The thing about the brawl is there really aren’t two sides of the story anymore. There were two sides of the story for a while but now pretty much both sides agree that CM Punk threw the first punch. The Punk side has backed off the kicking the door down thing. They have admitted [The Bucks] didn’t kick the door down. The Young Bucks did go into the room. They didn’t just go into the room with the head of legal. They went into the room with the head of legal (Megha Parekh) and the head of talent relations (Christopher Daniels). So they ain’t kicking down the door and like I said, both sides agree they didn’t kick down the door. Really the only disagreement at this point is were the Bucks aggressive? Punk’s side admitted he threw the first punch. The only disagreement is was he actually in fear for his safety or did he just start punching?

This is what happens when you rely on a guy like punk. He’s a prick. This is why WWE leans on guys like John Cena who are company men and do everything that’s asked of them with a smile

He’s a complete asshole and a cancer to everything he comes in contact with. Hopefully Dana gives him a Khamzat Chimaev fight soon.

Its because they were gay for each other

Omg, what is COREY MICHAEL PUNK doing in the impact zone???

I want to see that cp munk the straight edge chipmunk gimmick from the indies. Apparently it pissed off punk alot. 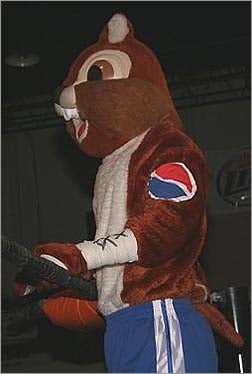