College lecture on ‘the violence of whiteness’

The University of Minnesota has invited a professor dedicated to “dismantling whiteness” to speak next week on how whiteness is an “existential threat” to the United States.

“The Elephant in the Room: A ‘Grown Up’ Conversation about Whiteness” will be presented by Lisa Anderson-Levy, an Anthropology professor at Beloit College whose teaching philosophy is predicated on the belief that “teaching is a political act.”

"She argues that whiteness poses an existential threat to social, political, and economic life in the U.S."

During her lecture, Anderson-Levy is slated to speak on a number of issues, including “the violence of whiteness” and how colleges and universities in the United States may be complicit in perpetuating this violence.

“This presentation explores the ubiquity and violence of whiteness and the ways in which academic institutions are poised to either reproduce or interrupt these discourses,” writes Anderson-Levy, referring to herself in the third person.

“She argues that whiteness poses an existential threat to social, political, and economic life in the U.S. and proposes that decentering whiteness is one of the most urgent social dilemmas of our time and demands our immediate attention,” the abstract adds.

Anderson-Levy will also speak on how college administrators can “decenter whiteness” at their institutions, “including in our budgets, our curricula, our disciplinary genealogies, our interactions with students, and our relationships with each other as colleagues.”

Though the lecture appears geared towards college administrators, students are welcome to attend, and UNM spokeswoman Emmalynn Bauer confirmed to Campus Reform that the university is indeed  sponsoring the lecture.

“The ICGC Alumni Lecture Series is an opportunity to highlight successful alumni and allow current students to engage with them,” Bauer said in a statement.

Campus Reform reached out to Anderson-Levy multiple times for comment, but did not receive a response in time for publication. In her post at nearby Beloit College, her academic interests include “feminist anthropology” and “activist anthropology.”

She is also the co-leader on a $600,000 projectto foster “diversity, inclusivity, and equity” at Beloit College, which was funded by the Andrew W. Mellon Foundation.

Anyone who speaks up against this is a white nationalist.

I am not a Trump nutter (didn’t vote for him) by any means but I am continuously made sick by posts like these on the OG - and am relieved that Clinton is not our president.

It’s frightening that the carpet gets laid out for these people get Jordan Peterson can’t speak without protesters.

I agree. The United States would be less violent if it just had shades of darkness. Like Africa.

It is time to segregate white people from the rest of the population.

I took a shot everytime I saw whiteness in that article. Goodbye friends.

She don't need no man.  Clap back if ya hear me.  Mmm nnnn. finger wag

Holla at ya girl.

I always roll up my windows and lock my doors when I roll through white suburbia.

Coming from academia I can attest that this garbage is alive in well on college campuses.

I'm firmly on team whitey for this one .

If whiteness is considered violent, what is blackness considered?  Serious(ish) question.

She don't need no man.  Clap back if ya hear me.  Mmm nnnn. finger wag

Holla at ya girl.

Shapiro, or Peterson get banned or protested for not saying ANYTHING CLOSE to this but this bitch gets an invite.

I hate being from MN sometimes

Well, this shit makes me feel violent, all right. Maybe she has a point.

I'm willing to bet that she had many white fellas sleep with her and then never call her again, and that has lead to what she is today.

If whiteness is considered violent, what is blackness considered?  Serious(ish) question.

This entire routine is hilarious.

I really wish I would have kept the textbook, it had chapters on several ,races, nationalities,etc. The chapters were highly critical of Germans, Irish, Italians,etc. High rates of alcoholism, beat and ridiculed wives and children, high divorce rates...

The chapters on Mexicans and African Americans included loyal family structures, very religious, want the best for their children, hard working..it was hilarious.I didn't have to say anything b/c the black students were actually appalled at what the book claimed about the European Americans and voiced their opinions. I just sat back and laughed.

Anyone who speaks up against this is a white nationalist. 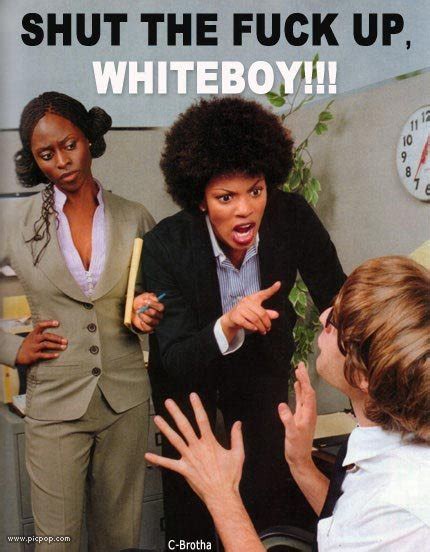 Man, our colleges are completely gone now. There is no effort to teach people how to think independently.