San Antonio, Texas — The San Antonio Police Department released body camera footage of a shooting in the 2300 block of Pinn Road on April 16th, 2021, killing two suspects and injuring a police officer. The shooting occurred round 11:27 a.m., when Officer Tyler Sauvage, a five-year veteran, carried out a visitors cease on a blue pickup truck. The video shows Sauvage approach the truck, which was occupied by two men and a woman, and instruct the driver to stop going through his pockets. The driver was then asked to turn off the car and put the key in a place where the police could see it. Sauvage asked for the driver’s ID and moments later, told him to step out of the truck after saying he could smell marijuana.

The driver admitted to the officer that he smoked marijuana earlier and that it was just the smell – that he hadn’t had any in his possession. He said to the officer in the video that he was “…Just being honest with you.” In the video, a police official said the front seat passenger is heard asking the backseat passenger for a gun. The officer then opens the driver’s door and in just a matter of seconds, the suspects fire multiple gunshots. Sauvage is hit by the gunfire in the hand, which is seen in the video covered in blood, and he retreated to his vehicle. His police radio was also hit in the exchange. The officer dropped his weapon in the video after being shot, but he was able to retrieve it before taking cover behind his police unit.

In the video, police said the suspects ceased fire as Sauvage continued to shoot as he saw movement inside of the vehicle and “feared he would be shot again by the suspects.” The two men in the truck were pronounced dead at the scene. Sauvage was taken to a hospital for treatment of his hand. The third passenger, a woman, was shot in the torso and was also taken to a hospital. The woman survived her injuries and has not been charged as of yet, according to police. The two men who were pronounced dead at the scene were identified as Alex Garcia, 25, and Sammie Barbosa, 33. 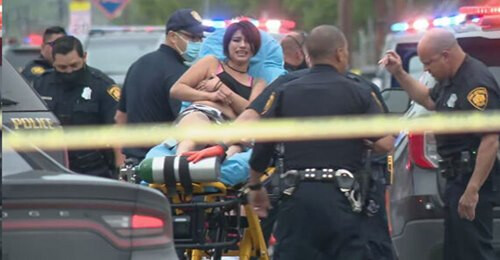 The left’s solution for this is to have cops stop conducting traffic stops. “Just send a ticket in the mail,” they say.

dont see how anyone can call that a bad shooting

Well done by the officer. Fat tatted fuck just looked like a dumb degenerate. Loved how he kept putting rounds in the truck.

He shot them with his hand that had just been shot …fuck yeah. 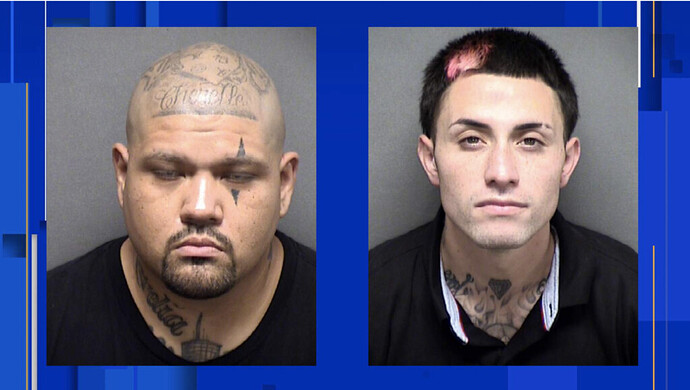 kinda curious if a passenger has to show i.d. too

They don’t but the cops ask for it doesnt have any bearing on what happened.

His hesitancy to draw his weapon earlier is a direct result of the demonizing of the police.

On a normal traffic stop, that would be true. As soon as he has suspicion of a crime like possession of marijuana, all three are detained and required to ID themselves.

If police have reasonable suspicion they can ask for ID. In my jurisdiction the person does not have to provide it, but they do have to identify themselves.

Did you guys see how fast the officer reacted to the shot? He reacted, went back a little, drew his weapon and fired multiple rounds - guy looked liked he had lots of training.

Happy ending in my book. Sucks the cop got shot but glad 2 criminals are dead and not going to waste tax payer money in jail.

Justice served since they shot the cop first. They prolly had alot more to hide than weed

Google US v Rice. One of many that allows to ask for passengers id’s

Justice served since they shot the cop first. They prolly had alot more to hide than weed

Probably had a dime bag and were facing a night in jail, now they will spend life in a casket.