Cops park on train tracks, places woman inside car, guess what happens next? 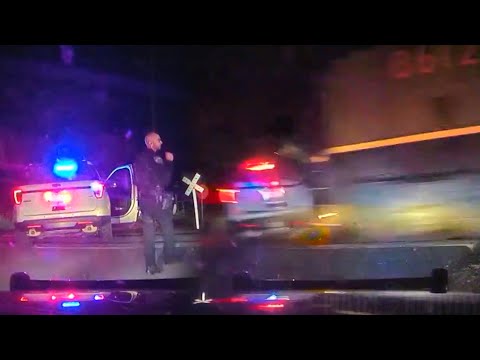 If I was a defense attorney, I would show this video at every closing argument of every case of every jury trial of just how incompetent, reckless, and stupid the police are to discredit the prosecution.

Don’t want to get cuffed in a cop car on the train tracks?

Don’t do the crime.

Don’t want to get cuffed in a cop car on the train tracks?

Don’t do the crime.

Police must have had a locomotive to do something like that

OK that was pretty funny

She’s got a track record now

Holee shit, lol! That’s horrible. I was skipping through the video to the good parts, but didn’t see anything referencing if they found or saw a dead body, but how could she not have died… that was a fucking wallop!

This woman has a solid case of them running train on her.

Did she survive? Cop appeared to have enough time to get her out but in that split second decided not to be a hero.

She should consider herself lucky that they didn’t park the cruiser in Cape Canaveral under a rocket ship that was about to launch.

Its like they hire the dumbest fucking retards to be cops

Those cops weren’t properly trained on how to operate under those circumstances.

What a bunch of fuck ups. I couldn’t look any of them in the face without a look of disgust ever again. Fuck those police officers. Y’all ain’t shit.

I hope they can trace back these cops train of thought

I hope they found more than gum wrappers and an empty holster in the car, for their sake. Actually, no… I don’t.

And she was starting to get on the right track.

How will the police cover their tracks?