Cops put handcuffed guy in back of car, he ends up shooting them 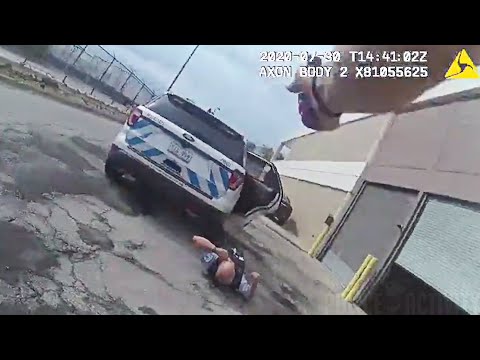 One of the crazier ones I have seen.

Chicago, Illinois — The Civilian Office of Police Accountability released body cam video of a 2020 incident at the Grand Central (25th) District police station in which three officers were shot. Police returned fire and shot the suspect, Lovelle Jordan, in the incident on July 30, 2020. The sentence comes two months after he pleaded guilty to one count of attempted murder and five counts of aggravated battery to a peace officer.

Footage shows officers pulling Jordan from the front seat of a stolen 2018 Porsche and throwing him to the ground. Officers cuff Jordan and tell him they are searching him for weapons. Jordan responds that he does not have any weapons on him. Jordan asks officers to place his handcuffs in the front because he had third-degree burns on his hands. Officers refuse but tell him they will remove the handcuffs once they are at the station. While in the SUV, Jordan was able to move his hands to the front and pulled the gun from his clothes, police said.

For almost four minutes, an officer drives a squad car with Jordan in custody in the back seat – unknowingly armed. When police arrived at the sally port at the station at 5555 W. Grand Ave. on the city’s West Side, and an officer opened the door of the SUV to take Jordan inside, Jordan shot the officer in the chin. The officer falls to the ground then rises about two minutes later and fires about two shots before running into the station. Four officers fired shots at Jordan, who eventually fell to the ground, left paralyzed by a gunshot wound.

Jordan had fired at least five shots, striking an officer in the shoulder and neck, prosecutors said. Two other officers suffered less serious wounds: One was shot in his protective vest, but the bullet didn’t penetrate; the other officer was wounded in the hip. Sources said between Jordan and the officers, more than 50 shots were fired. At the time of the shooting, Jordan was a convicted felon on parole for gun charges and had been on electronic monitoring until June 2020. Last month, Jordan was sentenced to 31 years in prison after pleading guilty. Shortly afterward on April 19, Jordan died when he hanged himself.

Guy should have been executed in the street right then.

How the hell did they miss the gun before placing him in the car?

How so? Piece of shit is still alive, will cost the tax payers millions to take care of his crippled ass, and will still get out before turning 60, probably sooner.

He’s not alive, he hung himself

One of the most chaotic and terrifying police videos. A lot of tells the suspect gave but hindsight is 20/20. Kept mustering around about moving the cuffs to the front, giving medical excuses - he seemed like he was hiding something.

That cop taking a shot to the chin - wow. Stayed in the fight. In total shock. Where were the med kits? I feel like being LE in Chicago you should have an all out ifak on every person and two in every vehicle. I wonder what damages that officer ended up taking getting shot in the chin but surviving.

How so? Piece of shit is still alive, will cost the tax payers millions to take care of his crippled ass, and will still get out before turning 60, probably sooner.

Shortly afterward on April 19, Jordan died when he hanged himself.

is it hanged or hung

Stupid of cops not to fully frisk him

My bad sir, read a different article. I like to think he was strung up against his will though.

Whenever anyone is arrested for a crime we should just leave them alone in a cell for 24 hours with a rope and just let them decide to save us all some money and time. Up to them.

This happened to an officer in St.Louis like 20 years ago. Guy in handcuffs still had a gun, shot an officer from the backseat of the patrol car.

This happened to an officer in St.Louis like 20 years ago. Guy in handcuffs still had a gun, shot an officer from the backseat of the patrol car.

I can imagine you get complacent, probably 99% of guys carry their guns or weapons in the same couple places… So you just get lazy and check those spots.

How the hell did they miss the gun before placing him in the car?

Btw, that officer that got shot did a hell of a job of getting the fuck out of the way. Dude rolled over to get behind the car and then army crawled to the opposite side. Props to that dude.

Got to admire the guy’s dedication if he was able to hang himself after being paralyzed.

Got to admire the guy’s dedication if he was able to hang himself after being paralyzed.

Oh it has happened more recently than that. I remember one where a handcuffed guy inside a police station pulled one out his pants with his arms still behind his back and shot it.

Shortly afterward on April 19, Jordan died when he hanged himself.

He should have done that earlier…