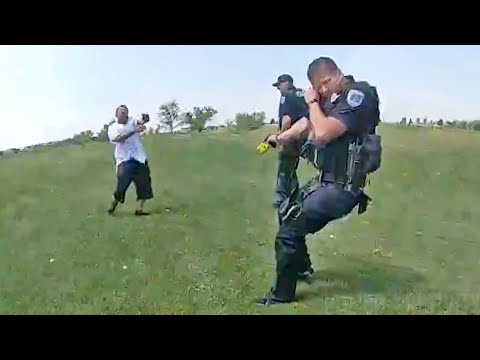 Thornton, Colorado — Newly released body-camera footage shows the fatal shooting of 33-year-old Lucas Antonio Salas, who died in an exchange of gunfire on a golf course in Thornton with the Northglenn and Thornton police departments. Salas, who was wanted on an arrest warrant for a parole violation, eluded officers who attempted to take him into custody, investigators said. Fleeing an apartment complex in Northglenn, Salas drove off road and through a fence to avoid capture. He fired a gun at Northglenn officer Joshua Moreau’s police car in the area of East 120th Avenue and Washington Street during a police chase.

Police pursuit continued and Salas ran the 2003 Nissan sedan he was driving into a ditch near the golf course at East 136th Avenue and Washington. Salas fled the crash on foot, onto the golf course, with officers pursuing him. Other people who were in the vehicle remained inside it. Officers chased down Salas, yelling commands for him to stop, according to the review. When they got close Salas drew a gun and fired. Thornton officer Mikal Timm and Northglenn officer Charles Festi “returned fire,” striking Salas. He was taken to a nearby hospital and pronounced dead. No officers were injured. A .40 caliber Smith and Wesson handgun was found near Salas. He fired one shot on the golf course. The district attorney’s office announced that the officers involved in the shooting will not be charged.

Looks like there was a hole in one on that golf course!

Looks like there was a hole in one on that golf course!

If only it was a dessert EAGLE that was used to shoot him.

Overall outstanding police work. Our agency had a shooting recently that was eerily similar. Having to traverse a great distance with an unknown threat demonstrates how rigorous the job can be and how important proper fitness, training and tactics really are.

Had to turn it off after a minute cause I got a call but the officer mentioned a “Reverse 911” call to the people on the golf course.

Does the dispatcher have the ability to draw a radius around a certain area and call every cell phone within that radius? If so, why is that not used more often with other emergency situations (was gonna say active shooter but perhaps they don’t want to call in case a person is hiding).

If you opt into a program like Rescue 911, dispatch sends a blast text that pings off cell towers in a particular geographic area if I’m not mistaken.

Black dude on a golf course. What could go wrong?