Could you handle Ritchie Incognitos harrassment?

I know everyone here fancies themselves as a tough guy, but do you think you could withstand the level of ball busting that incognito would throw at you?

Would you go to HR? Would you need to see a therapist? Oh what do you think you have what it takes?

This should be a reality show.

I would just chuckle and say, “Oh look, Richie’s talking about himself again.” The whole room would erupt with laughter and he would turn red with humiliation.

I was reading about him not too long ago. He truly was a genuine, grade-a asshole. He’d probably have a bad accident at practice, if I was on the field with someone like that. A lineman’s knees are his weakest link, and shit happens when people fall awkwardly on your knees.

“Richie’s actually a really sweet guy. He just has trouble expressing it.”

I’d look him square in the eyes and say

I’d look him square in the eyes and say

Those types of guys typically get mad when you don’t take them serious, just blow off all the shit he said and wouldn’t let it affect me. Now if it was a coach, I’d probably have words with the org.

Yeah, laughing guys like that off with some good fat, stupid and ugly comebacks mixed in here and there usually does the trick.

If he really got pissed enough to try and fight you though, that wouldn’t be good, lol. I think that’s what guys like him bank on, finding those dudes who are legit afraid of being physically hurt by him and laying into them. 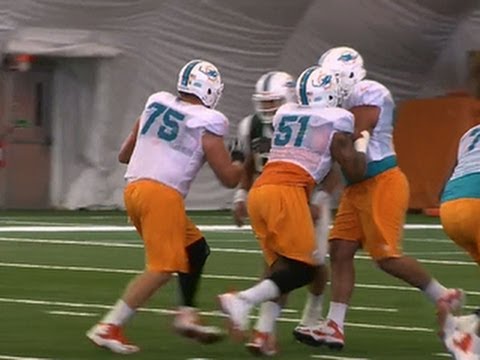 He’s a tubby fuck with no cardio. He’d get stomped with the quickness.

He’s legit insane though. Retard rage strength might kick in. Don’t fight him in the showers, he’d probably try to bite your dick.

Haha truth. As long as you were on the field or a street where you could make space and he couldn’t just grab you and fall over, I can’t see him being able to keep up any sort of movement for more than thirty seconds or so. After that, it’s pop shot in the head at will, assuming you can reach it. I might need a stool.

I highly doubt a NFL player doesn’t have cardio. You’d be surprised by those big boys and their cardio.

How would we know? They get a breather every ten seconds or so.

I turned that shit off when they bleeped out homophobic and racist.

You are underestimating the size and quickness of NFL lineman .