Below is my translation of the source article above:
Believe it or not, it is a true information that Fight Site exclusively learned from Filipovic's manager Orsat Zovko. Cro cop will be fighting Aleksander Emelianenko in russian capital Moscow for the second time in his career, the date is not set yet, but will most probably be in October or November.

Match will be held under rich russian fighting organization called Legend, which recently held an event between Badr Hari and Zabit Samedov among the other fighters.

"After winning The K-1 WGP title, we had offers coming from all over the world, from Brazilians who were one of the most determined, to Japan, U.S. and Europe. My suggestion to Mirko, after winning his first K-1 WGP title was that he takes a good two months rest before we even think about next match. After intense negotiations in last month, we concluded that he will be fighting at least two or perhaps even three times until by the end of 2013. Each fight has to be a special challenge for him" said Zovko and added few words abotu Aleksander Emelianenko:

“I don't even have to mention that Emelianenko name itself speaks enough about the toughest duo in martial arts world. I think that providing rematch to one of the legends of this sport and especially in his homeland, his territory (Moscow) gives Cro Cop and our entire team additional challenge and maximum motive."

Zovko exclusively revealed some plans ahead for the Croatian martial arts legend in 2013...

“There's an ongoing intense negotiation with Jaapanese for Mirko to fight on one of the most famous Japanese tournaments: INOKI Bom-Ba-Ye on the New Years' Eve. As i said for the previous match in Moscow, the opponent in Tokio has to be special challenge and additional motive to Mirko aswell. His opponent would most probably be Satoshi Ishii, who was Olympic champion and defeated ex UFC fighter Sean McCorkle, ex UFC champ Tim Sylvia and in his final appearance he beat another former triple UFC contender Pedro Rizzo. Talks are still in place, but we hope we will bring it quickly to an end" says Zovko

man that's wild , best of luck to both legends 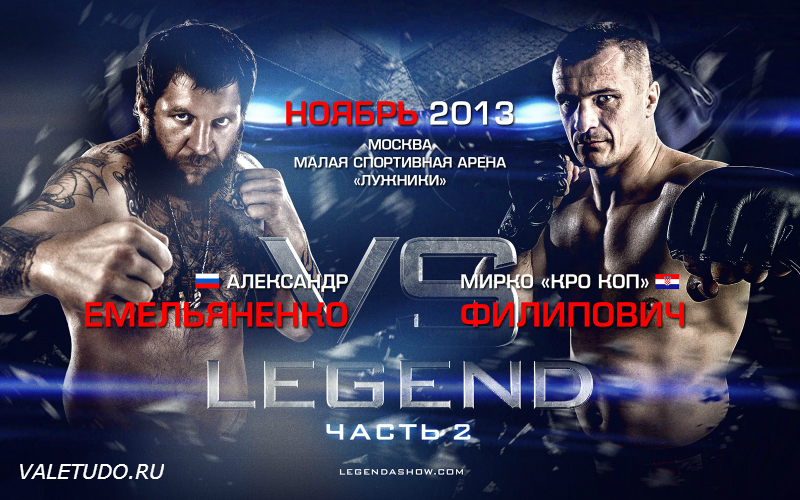 Will Fedor be in back talking shit again?

Yeah, it will be nice to see how will he look like in his favourite place to fight - ring. His last legit MMA match that took place in ring was in 2008 against Alistair Overeem if i remember correctly, i know he had loads of problems with his knees and back, and took 4 surgeries afterwards.

Combined with taking last K-1 belt few months ago (altough not to top 5 competition for me) his determination and overall mental game should be much better than in recent years, so might be an awesome match that i'm really looking forward to it.

Aleksander on the other hand had easy job with Sapp recently (and Sapp is a name that doesn't mean much in MMA world, especially lately :) .. so i'm curious to see what "renewed" and refocused Aleks that was living in a Greek eastern orthodox monastery for few months recently, can bring to the table.

Hoping to see some high action MMA match. First one was epic.

Awesome, but I have a hard time picturing Mirko winning since watching him get KO'd by Shaube.

looking forward to seeing this again. I hope it ends in similar fashion, just not sure who I want to win yet