Cyborg: Rousey can't compete with me

Daverr -
exactley, its 5 friggin lbs, give me a break ronda.

you wont make the fans happy for 5 lbs?

theres a real champ right there

The real kicker? She cuts at least double that to fight a 135. I'm telling you, fighters are not what they used to be.

I remember Fedor fighting anybody, no matter the size difference. That man was a fucking warrior. Rousey is scared and its so obvious.

What would be better for her career than to beat Cyborg? NOTHING!

we are thinking the same on this subject my friend

Why is this still talked about. Go away guyborg.

RileyPust , 24
27 minutes ago
I want Cyborg to lose in Invicta just so I can see the look on Tito's face.
Haha you read my mind!

id take cyborg 1st round tko over ronda for sure

Cain is ducking the 266+ pounders that fight in promotions no one has heard of.


and ronda looks more feminene in the face, but her body is just as manly

I would love it if both would just shut up and not do interviews.

hello, cyborg has never fought at 35


they are not far off in size at all,

ronda said she wanted cyborg, and would fight her at 45.


do what you say, simple.

not to mention who wants to see a drawn out cyborg in the biggest womens fight of all time...


and ronda looks more feminene in the face, but her body is just as manly

I don't see how their bodys look the same. 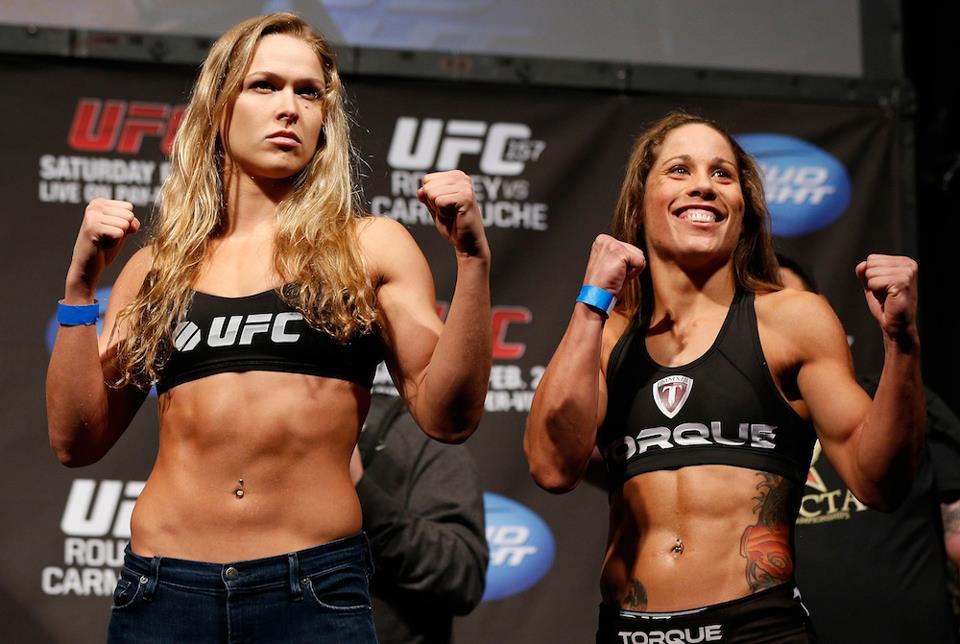 I'm willing to agree that it's genetics and nothing to do with substance abuse.. but it still comes down to their bodys aren't really comparable other than they are both in good shape.

edit: of course the UG squishing images doesn't help... if you can open the pics in their own browser.

There wouldn't be a 5 lbs weight difference at 140. Cyborg had to take drugs to get down to 145 she said, and she repeatedly claims she will be hurt for life if she has to cut more. Roussey hasn't had that kind of extreme problems cutting down to 135. If she put the same effort that Cyborg is claimin she could probarbly cut a few pounds more. (Yes she competed fat before against lesser opponents and in judo - which has nothing to do with this.) That means they are a weight class apart. Simple as that.

I for one refuse to believe that some as muscular as Cyborg couldn't get rid of some of that mass by just changing up her training.

"Cyborg: Rousey can't compete with me "

Duh. Was that a big secret? Even the UFC admitted this by going of their way to keep Cyborg away from Ronda.

borgs shoulders are a bit bigger, but they are both really big muscular girls

Cyroids without the cheating, can't beat anybody.

Daverr -
borgs shoulders are a bit bigger, but they are both really big muscular girls

Their arms are probably the least comparable... lol

Cyborg needs to quit whining about something that will most likely never happen.  Her image has been tarnished, she cheated, she took steroids, her wins mean nothing.

Ronda is the 135 champ, she just got her UFC belt, she's basking in glory right now, in the lime light, making the big bucks.  Why on earth would she risk all that to fight a cheater?

Is it ever going to shut up about Rhonda?? Get a freaking life.

ender852 - man instead of cutting 5 lbs and getting the biggest fight of her career on the biggest stage possible in her sport, she aligns herself with that dolt Tito and runs off with her giant clit to another organization entirely where she continues to talk broken english trash about Ronda.
I wish she would just shut up and fight, but with Tito as her "life coach" i know this will sadly never happen.
sigh.

Exactly. People are putting the pressure on Ronda to step up and be "the real Champ" or however they want to put it. Why not put the pressure on Cyborg to prove she doesn't have to cheat? Cyborg is the one who ran away from the UFC. Cyborg was the one who decided to leave the organization that Ronda was in. Cyborg was the one who could have let Mike Dolce work with her, and then if she really couldn't make 135 everyone would know it from a source most people trust. Instead we have to take the word of Cyborg, Tito Ortiz, and some anonymous doctor.

Not taking free services from one of the best in the business when it comes to nutrition and weight management is sketchy, IMO.