CBS News reports photos of Tommy and his sign went viral, with the St. Louis dad being called "father of the year." Tommy says his 12-year-old son Thomas had recently switched from public school to private school. He tells Inside Edition that Thomas' grades in Mandarin and "a couple of other courses" were down on his latest report card.

“Thomas get your grades back up and next time you’ll be here. Love, Dad,” read the sign, complete with a tearful emoji and Cavs logo.

The powerful message sparked a range of reactions — some praised it as a “parenting win,” while a few critics who slammed the dad for embarrassing his son.

Thomas just transferred from a public school to a private school, so his parents expected his grades might suffer, but this was far worse than they imagined.

“This report card didn’t show me that there was a lack of understanding or intelligence,” Tommy told CBS News. “It was a lack of effort being put forth by my son. It’s not that he didn’t get it — he didn’t do his best.”

Before the game in Charlotte, Tommy decided to get a sign custom-made in hopes his son would see his message on the big screen. After his photo went viral, Tommy called his son to ask if he saw the message.

So Tommy flew to Houston to attend the Houston Rockets-Oklahoma City Thunder game, and this time he carried a new sign: “Thomas can you hear me now? STUDENT then ATHLETE son. In that order. Love, dad.”

I think it's great!

Awesome...it's always a treat to have students with parents like that.

I guess different parents have different styles, but it seems like this guys actions would do more to foster anger and resentment than incentivizing the kid to get better grades.

If that was me, my initial reaction would be "fuck you" and never attend a ball game with him again...

Although for some reason I picture Schumer calling it MEAN SPIRITED in his Woody Allen voice. 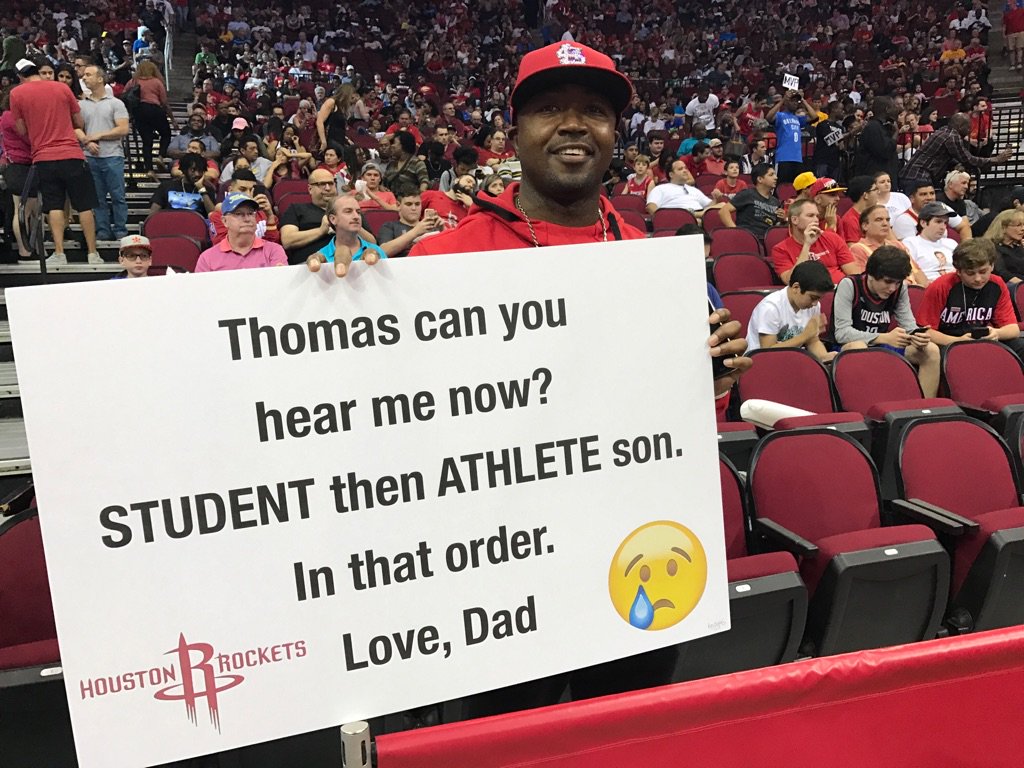 That's pretty funny. My son is 8 and already trolling me any chance he gets in his writing answers. Most recently taking a jab at my dreams getting crushed at an early age when I found out colorblindness disqualified me from ever being an astronaut which is what I had my heart set on doing.

What a douche. Totally attention-whoring. Like the dads that made videos pretending they were going to shave their sons head to punish them, then proceeded to rant on about it being bad to embarrass your child. They weren't wise either, they were trying to get likes.

I hope the kid can laugh about it one day, having a dad troll him. Too many kids like to complain and blame their parents for everything. My brothers and I shake our heads and laugh about the legit crazy shit my dad did years ago.